Intellivision in the Archive 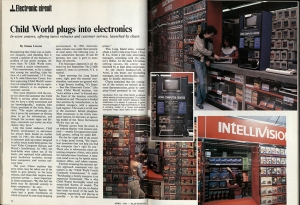 In March 2019, we spent two days at The Strong conducting research related to Intellivision, a home video game system produced by Mattel Electronics in the late 1970s and early 1980s. We have beenworking on this project off and on for almost five years and expect it to lead to a book tentatively titled Intelligent Visions. As our research progressed, it became increasingly apparent that we needed archival materials to round out our analysis of Intellivision and its significance. We had heard of The Strong for many years and were thrilled to discover that it held materials that would greatly aid our project.

We were on a tight schedule since we visited during our spring break from the University of California, Irvine. Fortunately, everyone we worked with and met was incredibly helpful, from start to finish. Everything was set up for us ahead of time; files ready to go and two nice big tables to work on. We spent our precious days at The Strong with our iPhone cameras, looking over a treasure trove of materials. We’ll now spend the next couple months examining these materials and cataloguing them into a database, but already it’s clear that the materials we discovered at The Strong will be invaluable. 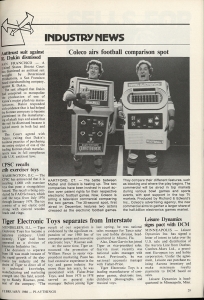 We examined the papers of Don Daglow, a programmer and manager at Mattel Electronics who designed the legendary Intellivision games Utopia and World Series Major League Baseball. We also examined Carol Shaw’s papers, a programmer who worked for the third-party developer Activision and designed the incredible Happy Trails. The materials from Daglow, Shaw, and others provide insights into the process of game design during this pivotal period in the history of video games. The Strong’s holdings also include valuable source code from both Utopia and Happy Trails, which is wonderful given the rarity of code available for Intellivision. These materials are complemented by The Strong’s collections of papers from executives, managers, and even lawyers for various sectors of the video game industry during this time. Materials from William Ford, Leonard Herman, Philip Orbanes, and Sid Sackson thus give us additional key perspectives regarding Intellivision and its historical context. 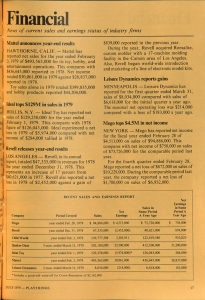 Finally, The Strong’s collection of game industry magazines is unparalleled. By looking through Playthings, RePlay, and other key periodicals published between 1975 and 1985, we could trace the rise of Intellivision and its parent company, Mattel Electronics. We were able to find invaluable financial information about major toy companies, including Mattel Electronics, in Playthings magazine which provided monthly coverage of business news from the industry. These industry magazines were instrumental for exploring Intellivision’s relationship to the gaming and entertainment industry more broadly (for instance, arcades), to competitors such as Atari and Colecovision, and to the video game crash of 1983–1984. That crash led to the closing of Mattel Electronics, but not the end of Intellivision; through the work of several subsequent companies, the platform continued into the 1990s and beyond, including emulation and the rise of retro fandom. Plans are now underway for a new, contemporary Intellivision system to hit the market in late 2020. With that in mind, we hope to complete the manuscript for Intelligent Visions by the end of 2019. Thanks in no small part to the generous support of The Strong, we are on our way to meeting that goal!