Let’s Put on a Show! 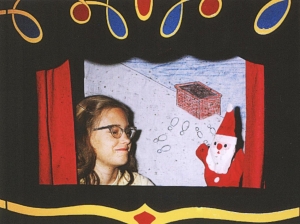 When I was growing up and my sister and I got together with our favorite cousins, there was hardly anything we liked better than putting on a show for the grown-ups. As I recall, the five of us kids would descend to our basement rec room where we’d cook up a script, cast the parts, devise costumes from the dress-up box, and practice our dramatic extravaganza. Meanwhile, I suspect our parents were upstairs rolling their eyes and bracing themselves for the semi-torture of sitting through our amateur theatrical. But for the kids at least, the pleasure of the endeavor was primarily in the creative and collaborative process, not in the performance itself which tended to be on the short side and probably got lukewarm reviews from the audience (good sports though the adults were to sit through what we’d concocted). 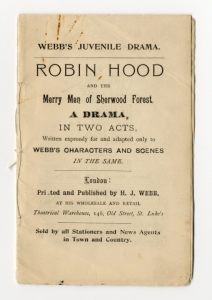 Those childhood memories got revived recently as I was exploring The Strong museum’s collection and I encountered a photo of a girl inside a homemade theater alongside a Santa Claus hand puppet. I especially like the hand-crayoned backdrop behind them, obviously the product of some industrious kid. All of which made me think that these days with a hiatus from school classrooms might provide an ideal opportunity for kids and grown-ups to engage in a little homespun theatrical magic.

Children have been putting on shows of one sort or another for centuries and probably even longer. One of the earlier home theatrical items I spotted in the museum’s holdings is a script titled Webb’s Juvenile Drama: Robin Hood and the Merry Men of Sherwood Forest from 1852. It calls itself “a Drama in Two Acts,” which sounds somewhat more serious and ambitious than my cousins and I ever were. You probably don’t have a spare script sitting around your house, but don’t let that hold you back. My cousins and I tended to do endless productions spoofing The Wizard of Oz, a story all of us pretty much knew by heart. And I’m guessing there are fairy tales, nursery rhymes, or other stories in your own repertoire that could serve as the basis for your show. 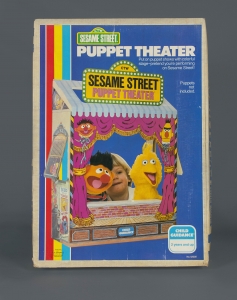 What’s going to serve as your theatrical venue? Sheets over a clothesline or rope can make fine curtains for a performance and lawn chairs or the living room sofa could work well for the audience. Or you could go smaller scale and carve an opening in the side of a cardboard box to act as your proscenium. Toy manufacturers have a long history of producing theaters for kids to use. An 1850 printed toy called the Pictorial Review Theater provided a stage, backdrops, and all the characters you’d need to act out the story of Little Red Riding Hood (another story that most of us easily remember). More than a century later, the Sesame Street Theater makes clear on its box that “puppets are not included” and the theater’s construction makes it look like a case of “some assembly required”—those words that strike fear in the heart of every parent at birthdays and other gift-giving holidays. 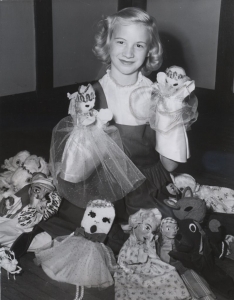 Have you thought about who to cast as your show’s stars? Maybe you’re ready to be an all-purpose writer-director-performer triple threat. Or perhaps this is just the opportunity that your hand puppets have been auditioning for. Puppets were inducted into The Strong’s National Toy Hall of Fame in 2015, in recognition of their timeless value as inspirations for creative play. Don’t have easy access to a puppet or three? Then it’s time to enlist your stuffed animals for the cause. Or maybe you want to make construction paper characters you can mount on those stirrer sticks that might be hanging around from the last time you bought a gallon of latex paint.

Now that I’ve piqued your interest in becoming a theatrical producer or performer, I hope you’ll carry through to put on a show of your own. And, when you do, don’t neglect to share your experiences with The Strong’s Play Stories project, dedicated to gathering, preserving, and sharing stories, images, and videos about play in 2020. So gather the cast, turn on the spotlights, curtains up—let the show begin!