Born in Shreveport, Louisiana in 1931, Charles Harrison spent his childhood playing with model airplanes and Erector sets. His father taught industrial arts and his mother decorated the home with a keen eye for design. Inspired by his parents, Harrison built different structures and mechanisms to make his toys move and lift. In an interview with Smithsonian Magazine, Harrison recalled, “I built a boat once—took it out to the pond, put it in there and it sank with me. That’s how you learn.” During the summers, he wandered experimental farms, laboratories, and woodshops at the universities where his father taught.

Graduating in 1954 with a Bachelor of Fine Arts from the School of the Art Institute of Chicago, Harrison was drafted into the military where he was trained to be a cartographer and remap post-World War II West Germany. After his military service, Harrison returned to graduate school. Even with his degree, he struggled to find employment, but not for lack of skill. A manager at Sears, Roebuck, and Company informed Harrison that he would not be offered the position he had applied for, because there was an unwritten policy that the company did not hire Black people. But Carl Bjorncrantz, head of the Sears Design Department, noticed Harrison’s talents and gave him freelance work. 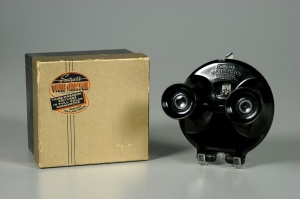 During this time, Harrison also worked for Robert Podall and Associates. One of his assignments was to oversee the redesign of the 1939 View-Master, a portable photography viewer with three-dimensional pictures based on 19th-century stereoscopes, originally created by Harold Graves, president of Sawyer’s Photographic Services, and camera buff William Gruber. Harrison transformed the cumbersome device into a lightweight red plastic viewer that was instinctive to use. The last factor was especially important to Harrison because he had dyslexia. Harrison’s View-Master proved an immediate hit in 1959. In the Smithsonian interview, he recalled, “It happened to hit America at a time when it did a magical thing. It was low cost enough when I got done with it that they could buy it for children and let them play with it. They put these disks in with stories and they were attractive to children.” Simplicity and durability became a hallmark of his work.

In 1961, Bjorncrantz phoned Harrison with an offer for a full-time position at Sears. He took the job with the understanding that “the African American people were on the outside of American culture. . . .  I accepted it as the way life was going to be, and that I’d learn to negotiate. And I did.” Harrison became the first Black leader for the design department. His work included transistor radios, the Jiffy-Jet hair dryer, barber chairs, power tools, toasters, and the first plastic trashcan, among hundreds of other innovative products that demonstrated the principle that form follows function. Harrison diversified the company’s portfolio, and confronted racism.

Following his tenure at Sears, Harrison taught at his alma mater, the University of Illinois, and Columbia College. In 2008, he became the first Black recipient of the Cooper Hewitt, the Smithsonian Design Museum’s National Design Awards program. While Graves and Gruber are credited with the creation of the View-Master, it was Harrison who turned it into an attractive and user-friendly toy that was celebrated as a classic by induction into the National Toy Hall of Fame in 1999.