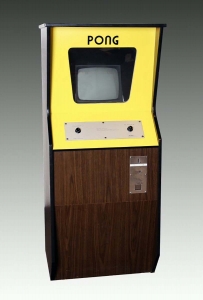 As with almost anything having to do with the history of technology, progress tends to be evolutionary rather than revolutionary, the accretion of small innovations and gradual improvements over time that add up to startling changes. Video games are no different, so the answer to the question “What is the first video game?” is, of course, complex and depends on what we mean by a video game and what we mean by “first.”

If you asked someone on the street the question “What is the first video game?” their answer might well be Pong. Atari released the arcade game Pong in 1972 and this electronic table tennis game became an instant hit in bars, restaurants, laundromats, and other places around the United States (and eventually internationally) where people played coin-operated games like pinball or electromechanical driving games.  Pong brought video games to the public consciousness in a widespread way for the first time, which is why many people think of it as the first “video game.” But it was not even the first arcade video game created by Atari founder Nolan Bushnell. A year earlier, he had partnered with the manufacturing firm Nutting Associates to release Computer Space, a game set in outer space in which two ships tried to destroy each other. The cabinet for Computer Space was stylishly hip, but the gameplay was clumsy and it didn’t take off. It did lay the groundwork for Pong, however, and soon people all over America were dropping in quarters by the millions to bounce an electronic ball back and forth.

And yet Pong itself was not even the first electronic tennis game, for it was preceded by another product—the Magnavox Odyssey—that can stake multiple claims as the first video game. Certainly it was the first home video game system—that fact is beyond dispute, though it was based on analog, not digital circuitry. Magnavox released the Odyssey in 1972 (shortly before the release of the arcade version of Pong) after six years of work by Ralph Baer, its creator. Baer had first conceived the idea of using a television to play a game in 1966 and he soon developed opens in a new windowa series of prototypes to control spots on a screen. What emerged was a game that transformed the television set into a gaming device. The concept was alien to many people, so Magnavox had to work extra hard to get people to reimagine what they could do with their televisions, as is demonstrated in the retail unit they created for their stores. This device played a film strip of a opens in a new windowcommercial that showed a happy family spending time engaged in this new-fangled activity, video games. 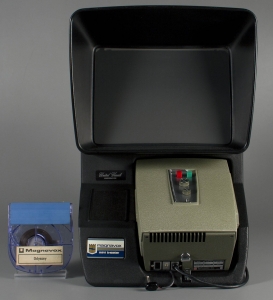 Users of the Magnavox Odyssey weren’t the first people to play a video game, however, for select members of society had access to large mainframe computers and, not surprisingly, some of them began to think about ways to use them to play games or run simulations. In The Strong’s collection are materials from the first educational game (about the ancient city of Sumer) and opens in a new windowthe first computer baseball simulation developed by John Burgeson in 1961. Perhaps the most famous of these mainframe computer games, however, is Spacewar!, a game in which players controlled two dueling spaceships in cosmic warfare. Created at the Massachusetts Institute of Technology in 1963 by a group of students led by Steve Russell, the game was so popular that it spread around the world to other computer centers in universities and government research centers (and inspired Nolan Bushnell’s aforementioned Computer Space). In 1971 it caught the attention of Rolling Stone magazine which published a pioneering piece of video game journalism, a story on what the cover called “The First Intergalactic Spacewar Olympics.”

Yet while Spacewar! was a landmark in the history of video games for its use of a digital computer to power moving images on a screen, there were public demonstrations of video games even before then. In 1958, for example, scientists at Brookhaven National Laboratory cobbled together various electronic equipment including a Donner Model 30 analog computer to create a simulation of tennis on an oscilloscope that people could play using custom-made controllers. The creators gave the public the chance to play it at an open house that Brookhaven was having that year, as well as an improved version the following year. One of the people to play it was David Ahl who went on to become a pioneer of computer journalism and even testified about his memories of seeing Tennis for Two in the lawsuits between Magnavox and Atari over video game patents in the 1970s. 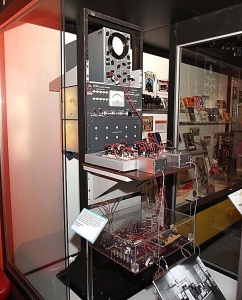 So is it Tennis for Two that we can safely call the first video game? Perhaps, but the fact that it was created for an open house for the public is reminiscent of other public venues where electronic games had long been featured. The public was fascinated with the capabilities of these new computing devices, and so electronic gear that played simple games had become a staple of many such public demonstrations at world fairs, science museums, and scientific expositions. The delightfully named “Bertie the Brain,” for example, was a custom-made analog computer that played opponents in tic-tac-toe at the 1950 Canadian National Exposition, and Westinghouse created the Nimatron, an electro-mechanical machine that played the game Nim at the 1940 World’s Fair. (If you’re interested in reading more about these various demonstrations, I would recommend Alex Smith’s opens in a new windowarticle on this subject.)

These public demonstrations of the nascent powers of computers certainly deserve some consideration as the progenitor of the video game, but why stop in the 20th century? In the 1864 autobiography of Charles Babbage, the man widely credited with originating the development of modern computers with his designs for his Difference Engine and Analytical Engine, he outlines how a machine would play games of skill such as “TIT-TAT-TO.” Babbage’s opens in a new windownotebooks show that he was working on the game as early as 1844, meaning that by some measures the history of video games goes back almost 180 years. Babbage’s electro-mechanical tic-tac-toe game is, of course, a far cry from modern video games, but since his ideas greatly influenced the development of modern computing, it seems a reasonable place to stop.