Every fall, across the United States, young men strap on helmets, crowds gather to cheer, and players smash into each other on the gridiron. Football is one of the country’s favorite pastimes, and today it’s a multi-billion-dollar industry. And yet it’s also a sport that has come under attack for the injuries it can cause players, especially those related to damage to the brain, such as chronic traumatic encephalopathy (CTE). While the long-term effects of these injuries are still being researched, no one can deny that football is an inherently violent game and always has been. In fact, violence has always been central to its appeal, and its massive popularity owes much to the fact that it met a felt need in the United States in the late 19th and early 20th centuries for a sport that could toughen young men. 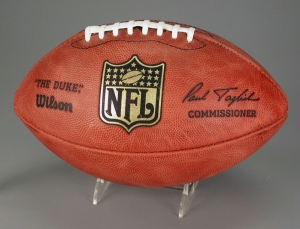 Sport has always been perceived as a training ground for life, something that taught young people virtues that would serve them later in life. The ancient Greek Olympics were a means for young men to learn manly virtues (women did not participate, either as players or spectators), as well as bring glory to one’s city-state. Victorian England prized the sports students played at its elite schools. It was a saying that the battlegrounds of empire were first won on the playing fields of Eton. And football partook of that tradition.

Football grew out of an English tradition of ball games that split into modern football (soccer) and rugby. It came over to America in the late 19th century when college teams took up the game and began modifying it to make it more exciting and hard-hitting. The first college football game is thought to have been between Princeton and Rutgers in 1869. The sport soared in popularity as thousands flocked to the games.

What explains the boom? Certainly one factor was the rise in the number of colleges as the American population soared. However, the number of students in American colleges made up a relatively small percentage of the total population. And yet colleges had an outsized influence on popular culture, especially in the early 20th century—the image of college life became one that was idealized and celebrated. And football became the prime focus of this adulation of college culture.

The big game, whether between Yale and Harvard or Michigan and Ohio State, was the focus of media coverage. Newspapers splashed the results across the front page, bringing attention to the exploits of elite college athletes to millions of people who might never have set foot on a college campus. The college novel, one of the most successful genres of popular fiction of the time, likewise celebrated the role of sport in general and football in particular.

Consider one such early 20th-century novel. In Boys and Men: A Story of Life at Yale, published in 1900, the plot revolves around the football careers of two characters, Jack Eldredge, the scion of a railroad president, and his roommate, Tarbell (he’s known by this single name through the novel), an older, self-supporting man from Arizona who has made it to Yale largely through his own grit and determination. Throughout the book, they face challenges, both on and off the football field, but it’s on the playing field that their character is tested through the painful clash of body against body in a battle of wills. Through these contests they grow as men.

This literary celebration of football’s role in turning boys into men paralleled a broader societal interest in the way sport could effect this transformation in individuals, in large part because seismic forces were transforming society in ways that threatened the status of American elites. America, by the end of the 19th century, was turned upside down by heavy industrialization, massive immigration, and rapid urbanization. With these changes came worries among the traditional elites in the country—wealthy Anglo-Saxon Protestants—that their status would be threatened by these tidal forces of change. Prominent Americans talked darkly about “race suicide” at a time when Charles Darwin’s theories of natural selection seemed to suggest that in the game of life the contest was determined by, in Herbert Spencer’s phrase, the “survival of the fittest.” Furthermore, America seemed to be in a contest with other nations—England, Germany, even Japan—for control of the world’s resources and lands. There was significant worry that the country, and more specifically the young men who came from the elite, would not be a match for the opponents they faced. Football, with its brutal physicality, seemed a sure way to toughen the youth up.

This was certainly what Theodore Roosevelt believed. T.R., as he was affectionately known, had transformed himself, through hard physical exertion, from a weak, sickly youth into a muscle-bound adventurer and war hero. In May 1900, while Governor of New York and the soon-to-be-nominated Vice President of the United States, Roosevelt published an essay called “The American Boy” in St. Nicholas, the leading children’s publication for American youth (especially those from privileged backgrounds). In it, Roosevelt laid out his views on American boyhood. The ideal American boy “must not be a coward or a weakling, a bully, shirk, or a prig. He must work hard and play hard. He must be clean-minded and clean-lived, and able to hold his own under all circumstances and against all comers. It is only on these conditions that he will grow into the kind of American man of whom America can be really proud.”

So how could this transformation be achieved? For Roosevelt, the increased popularity of tough, physical sports like football were key. He explained in his essay:

During the last few decades there certainly have been some notable changes for good in boy life. The great growth in the love of athletic sports, for instance, while fraught with danger if it becomes one-sided and unhealthy, has beyond all question had an excellent effect in increased manliness. Forty or fifty years ago the writer on American morals was sure to deplore the effeminacy and luxury of Americans who were born of rich parents. The boy who was well off then, especially in the big Eastern cities, lived too luxuriously, took to billiards as his chief innocent recreation, and felt small shame in his inability to take part in rough pastimes and field-sports. Nowadays, whatever other faults the son of rich parents may tend to develop, he is at least forced by the opinion of all his associates of his own age to bear himself well in manly exercises and to develop his body—and therefore, to a certain extent, his character—in the rough sports which call for pluck, endurance, and physical address.

Roosevelt closes his essay with the credo: “In short, in life, as in a foot-ball game, the principle to follow is: Hit the line hard; don’t foul and don’t shirk, but hit the line hard!” 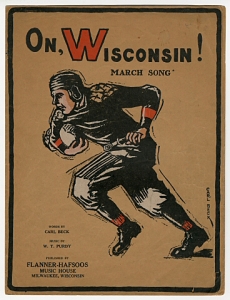 It’s worth noting that for Roosevelt, it was the very roughness of the sport that made it worthwhile. And he was well aware of its violence and potential for physical harm. As William Baker notes in his Sports in the Western World, by the end of the 19th century, “Numerous injuries, a few deaths, and too many slugging matches on the field of play caused several colleges, such as Marquette, to abolish the game.” Roosevelt knew of those costs when he urged the game as a molder of manhood for boys.

And yet even Roosevelt had his limits of acceptable violence. In the fall of 1905, collegiate football games resulted in 18 deaths. Eighteen! It’s hard to believe that statistic today when even one death makes national news. Some of these deaths resulted from the rules (the forward pass, for example, was not yet legal so yardage was gained almost exclusively from running the ball), but much was also the result of foul play. Roosevelt sought to save the sport and summoned leading representatives from Harvard, Yale, and Princeton (some of the chief football powers) to the White House for a meeting to lay out a plan to reform the game. The result was that in 1906, the Rules Committee met in New York to change it fundamentally by limiting the length of the game, legalizing the forward pass, establishing the line of scrimmage, and making other changes that reduced the number of severe injuries while still preserving the game’s unremitting physicality. The changes were successful. Football boomed, and by the 1920s passion for it had spread nationwide. Harper’s magazine referred to it as America’s “national religion” and, when professional football began to get popular, the public’s enthusiasm for the game only skyrocketed.

Today, football appears to be in crisis again. New scientific findings on the health impact of the game, especially in regard to brain trauma, have many players—and parents—worried about the suitability of the game. And yet as this history shows, football has always taken a violent toll and people were aware of that violence. In many ways, indeed, the game might be becoming less dangerous than it used to be (at least in term of immediate injuries) as rules have gotten more restrictive and safety equipment better.

Football at its core is a violent game, and indeed its rise in popularity is largely a result of that violence. Advocates thought football’s dangers were less than the long-term dangers they perceived to youth who might shrink from such raw physicality. The fact that we are rejecting it because of that violence is perhaps a reflection not only so much on football but on ourselves. Whereas once Americans saw football’s hard-hitting violence as redemptive and transformative, now we increasingly see it as too dangerous to countenance.

The game hasn’t changed that much, but perhaps we have.