In October 2017, I had the chance to be at The Strong National Museum of Play as a research fellow collecting data for my Dolls in Focus project aimed at revisiting and expanding the findings of my previous linguistic investigation on dolls’ language. Surprisingly, what I thought would primarily be an exploratory incursion into dolls’ universe from an academic perspective turned out to be a rather touching and personal experience that allowed me to revisit my own childhood memories. 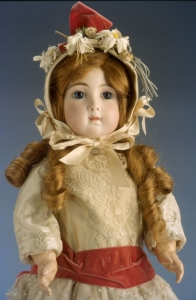 For a whole week, I had a wide variety of dolls coming in my direction, from old Jumeau Bébé dolls, walking and talking baby dolls, to Barbie dolls, of course. The Strong curators carefully selected more than 70 dolls for my examination, as well as seminal books I had requested. The museum’s staff proved to be extremely efficient in providing me with all information regarding the artifacts I was analyzing, such as their production date by the toy manufacturer. They also supplied me with instructions regarding the use of museum images in my future academic publications. 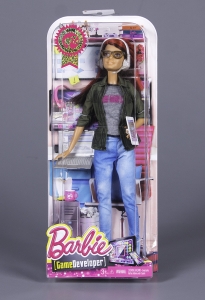 As an academic from the area of linguistics, I’ve been conducting toy research for almost 15 years, but I had never enjoyed the chance to engage with such a large collection of artifacts. My previous work had concentrated on language and images, notably the verbal and visual features of web advertisements for dolls. For this reason, being at The Strong gave me the opportunity to carry out a thorough analysis of dolls mainly as three-dimensional objects, which ended up enlightening my view of dolls’ material configurations.

From a linguistic perspective, my research and data collection experience at The Strong confirms that examining toys such as dolls as actual three-dimensional objects opens up possibilities for a broader analysis. The analysis can deal with the toys’ meanings as supported by design features such as their iconography, composition, material qualities, and the degree of realism of their representations. Such multimodal properties can lead to a deeper interpretation of their given motifs—or visual pointers—as clues to the meanings that their symbolic, somehow “unnatural” features convey. Observation on toys’ kinetic design perceived at the tactile level can also lead to relevant findings on their attached gendered meanings. In other words, a linguistic analysis that privileges not only a two-dimensional perspective but also a three-dimensional investigation of the visual, tactile and kinetic properties of toys like dolls might help to capture the essence of the social view on men’s and women’s roles in contemporary society.

These are only some of the reasons that made my research period at The Strong such a happy and productive one. This will certainly reverberate throughout my future academic productions on the language of toys, both in national and international contexts.