A Magical Gathering in the National Toy Hall of Fame 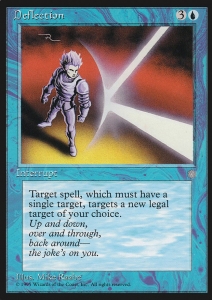 “Up and down, over and through, back around—the joke’s on you.”

On November 7, 2019, I was delighted to help celebrate the induction of Magic: The Gathering into The Strong’s National Toy Hall of Fame. And that occasion inspired me to think back on my own personal history with the game. I played Magic: The Gathering for the first time during my senior year of high school. I’d played card games before, of course, but no amount of poker or Uno could prepare me for what, I would eventually learn, was the grandfather of all collectable card games. 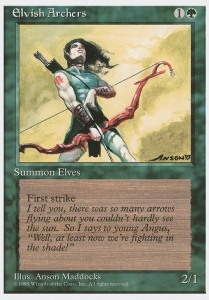 Thankfully, I was playing with someone experienced. He let me choose from among his pre-made decks, so I didn’t have to buy and build my own. Though decks are traditionally made combining two of the five colors present in the game, he recommended I start with just one. I picked Green, for the simple reason that the Green deck was stacked with elves. (I was probably on a Lord of the Rings kick or something. Besides, elves are cool.) After only one round—which I lost miserably—I was hooked.

At its core, Magic is a game of strategy. In traditional matches, two players face off in a duel, each using a deck of 60 cards. Part of the deck contains land cards (also called mana), which players use to “cast” the remainder of their cards onto the playfield. Each card has a mana cost, and since each land can only be used once per turn, players must be judicious in the order they play their cards. The rest of the deck is made up of creatures, artifacts, enchantments, and spells. The goal of each match is to deal enough damage to take an opponent’s life points down to zero.

Though each of the five colors in Magic contain the same types of cards, their focus is quite different, allowing players to create decks that reflect their own interests and play style. Red, for example, tends to have a higher number of direct damage cards (Lightning Bolt and Fireball are two famous examples), while Blue focuses on traditional “magic” elements, such as blocking spells or allowing players to look ahead at the next cards that will be drawn. Black decks often allow for resurrection of creatures that had been taken out of play previously. In short, even though the decks are balanced in terms of power, that power is demonstrated in very different ways. 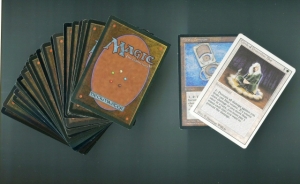 I’d like to say that Magic is one of those games that’s easy to learn and difficult to master, but that would be a lie. It’s just difficult, period. Yes, you can learn the overarching rules quickly, but every card has its own properties and performs individual actions. If it’s not the most basic of basic lands, you’re going to need to read the instructions on every single card as you play it. Some cards can even overturn the game’s main rules.

In fact, Magic is so intricate that it was recently named the most complex game in history, and the first where determining the outcome of a match is non-computable even with our most sophisticated programs. There are simply too many possible outcomes to predict with any level of accuracy. This might actually be of little surprise, considering the game was created by mathematician and inventor Richard Garfield, who drew heavily from pen-and-paper role-playing games such as Dungeons & Dragons.

But in truth, I find Magic fun because of, not in spite of, its difficulty. With so many possible ways to play the game, it’s impossible to become bored, even when using the same deck over and over. Each game is unique. Additionally, players never know what their opponent might be hiding up their sleeve. With more than 20 billion cards produced during the game’s peak popularity between 2008 and 2016, the possible combinations are limitless.

Playing the game is also only half the fun. Though I started out with a pre-owned deck, I quickly discovered the joys of building my own, especially when I had enough experience to know which types of card combinations I worked best with. Of course, this is where the “collectable” part of the collectable card game genre comes into play. Certain cards immediately became noteworthy for their immense power, and those fetch hefty prices. (The most coveted card of all, the Black Lotus, costs zero land cards to play, and allows the holder to add three mana of any single color to their pool, and can cost anywhere from $5,000 to $30,000, depending on its condition.) Cards are also phased out over time in official tournaments, so players must keep adding to their card collections if they want to continue playing in sanctioned duels.

Despite the cost and the difficulty, the game boasts a large group of dedicated players and fans who continue to come back again and again. Game publishers Wizards of the Coast also offer engaging backstories for each new card set, allowing players to become truly immersed in a fantasy world with characters they come to care for, rather than just playing a game for the sake of playing. And the nearly endless card combinations allow players to develop their own style, entering the world on their own terms and with their own strengths.

Today, I have the most fun playing Blue and White combination decks. As you might have guessed from the opening card quote, I take immense pleasure in foiling an opponent’s big play by using Blue cards like Deflection and Counterspell, which can change the target of a spell or stop an action all together. But I still remember that first Green deck fondly (especially the elves), and I’m looking forward to potentially building a similar deck in the future for my own children to use.