A Flick of the Wrist: Flying Discs and Frisbees

Have you ever had a day when you just want to throw something? Well, it’s probably optimal if you choose an object that is meant to be thrown. Playthings such as softballs, paper airplanes, water balloons, and Frisbees count among the items which get the go-ahead for a wind-up and release. As I mentioned in a previous blog about toys people throw, “Sometimes I like to throw for distance and speed, other times for accuracy. Trajectory, body mechanics, kinetic energy, and velocity are part of the formula. Those factors (combined with other variables) determine how far you can throw something, what direction it will take, and how fast it will go.” Although flying discs and Frisbees are objects that you more-or-less “flick and fling,” relying heavily upon wrist motion, I categorize them as “throw toys” and they rank among my favorite things to heave.

When and how did flying discs and Frisbees originate? Predecessors of the modern Frisbee were predominantly made of metal and can be traced back several centuries to the first Olympic Games in Greece in 708 BC when discus throwing was part of a pentathlon event. Later, in 2nd-century BC India, warriors used a disc with sharpened outer edges, called a chakram, as both a throwing weapon and a hand-to-hand combat tool. In the 14th century, a horseshoe-like game, quoits, appeared in England as early as 1388. Simply a ring tossed over a stick target, quoits remains still popular among sporting clubs in England and the U.S. 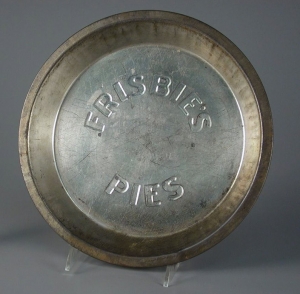 The success of marketing flying metal playthings in the United States can be attributed to Fred and Lu Morrison. According to his book, Flat Flip Flies Straight!, Fred Morrison states that he and his then-girlfriend Lu first started tossing around a popcorn can lid over the Thanksgiving holiday in 1937. Within a year, they had graduated from throwing popcorn can lids to pie pans, and then from pie pans to cake pans! While flinging around a cake pan on a southern California beach in 1938, Fred and Lu were offered 25 cents for their 5 cent pan, resulting in an instant profit. That first unintentional sale served as the catalyst for a toy that would eventually become a household name—the Frisbee.

In the late 1930s and early 1940s, Fred and Lu continued to sell cake pans as flying objects and often demonstrated their gyroscopic and gliding techniques on various southern California beaches. After enlisting in the Air Force and serving as a World War II pilot, Morrison returned home to California, still interested in selling flying discs to consumers. Facing limitations on the use of metal as the result of World War II, Morrison investigated the idea of creating a flying disc made solely out of a relatively new type of material: plastic. By 1948, Morrison and his business partner, Warren Franscioni, formed the PIPCO company and manufactured the first flying discs made from plastic that they named the Flyin-Saucer. 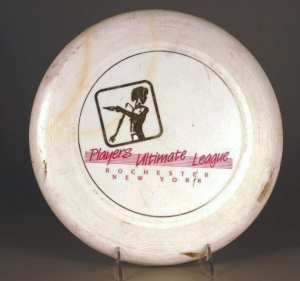 A few years later, Morrison and Franscioni parted ways, but Morrison continued to produce his own version of a flying disc called a Pluto Platter. In January 1957, Morrison sold the rights for the Pluto Platter to Wham-O Mfg. Co.; by June of that year Wham-O co-founder Richard Knerr renamed and trademarked the saucers as “Frisbees.” Knerr thought it would be a good idea to use a name with which people were already familiar, since Yale University students had been tossing around empty Frisbie Pie Company pans on campus for years, and young people in the Northeast were already using the term “frisbie” to describe these flying discs. In 1964, Wham-O’s general manager and VP of Marketing, Ed Headrick, helped popularize the Frisbee by making slight design modifications and assisted in forming disc golf leagues that promoted Frisbee as a sport and not just a recreational leisure activity. In 1967, another flying disc game, Ultimate, caught on, and enthusiasts continue to play the two sports all over the world today.

Although Frisbee is a registered trademark and brand name, most people refer to all solid, flat flying discs as “Frisbees.” (The term “Frisbee” has become genericized in much the same way that people refer to photocopiers as “Xerox machines” and facial tissues as “Kleenex.”) However, as the result of its longevity, popularity, and household name status, the Frisbee was inducted into the National Toy Hall of Fame in 1998.

On a nice, warm summer day, I still love throwing Frisbees (and other flying discs) with my friends,  playing a friendly game of KanJam, or throwing it freestyle while showing off some of our best moves. I don’t think I’ll ever grow tired of these aerodynamically sound, perfe  ctly round pieces of plastic.