In the book Timeless Toys: Classic Toys and the Playmakers Who Created Them, author Tim Walsh provides some insight as to how the idea for Lite-Brite came to fruition. According to Walsh, Marvin Glass, Henry Stand, and Burt Meyer from the Chicago toy design firm opens in a new windowMarvin Glass and Associates were walking down Fifth Avenue in New York City while in town for the 1966 Toy Fair when they spotted a colorful window display that used hundreds of colorful lights. The trio was awestruck by the display, as were other passersby.

At that moment they felt inspired to create a toy that would mimic the same colorful light display concept, although they speculated that it might be difficult to create as a safe, in-home product that would be cost-effective to manufacture. Fortunately, Burt Meyer continued to brainstorm about this idea and started working on a prototype.

Meyer envisioned a product with a single light source (a light bulb) and translucent colored plastic pegs. He fabricated plastic panels with a matrix of holes and opaque black paper sandwiched between them to serve as a background for the display. When the colored translucent pegs were inserted into the holes and the box was plugged in, the light would shine colorfully through the plastic pegs. The prototype was pitched to Merrill Hassenfeld of opens in a new windowHassenfeld Bros., Inc. (Hasbro) who signed a deal within an hour. Lite-Brite was on its way into thousands of children’s lives. 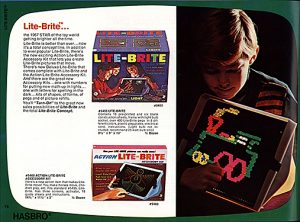 The original Lite-Brite produced in 1967 came with 400 plastic pegs in eight different colors: green, blue, red, yellow, orange, pink, purple, and colorless (clear). Countless designs could be created using freeform, although sets included several templates that yielded specific designs such as a boat, a flag, ducks, a cat, a house, flowers, a boy, a girl, and a pumpkin. By 1968 toy stores featured an entire accessory line including Action Lite-Brite, Lite-Brite numbers, Lite-Brite alphabet, and opens in a new windowshapes and forms. Eventually templates of licensed characters such as opens in a new windowMickey Mouse and Bugs Bunny became available as well.

As of 2015, Hasbro continues to manufacture Lite-Brite, now upgraded and streamlined for modern play.

Some models even include LED lights and, battery-operated travel versions also exist. These contemporary units are much smaller than the original, and their portability makes them a viable alternative to electronic interactive toys. Adults looking for a bit of nostalgia with a modern flair can find mobile phone and tablet apps that emulate the colorful light play. Lite-Brite sparks creativity and imagination. It is a blank “canvas” that inspires countless works of art. In fact, I may just borrow my nephew’s Lite-Brite and see what masterpiece that I can create.