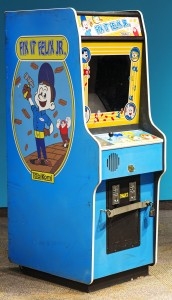 The Strong recently acquired a custom-built Fix-It Felix Jr. arcade video game at the center of Disney Animation Studios’ 2012 film Wreck-It Ralph. This summer, visitors to The Strong’s Boardwalk Arcade exhibit have the opportunity to play this rare game. Fix-It Felix Jr. allows players to take on the role of the game’s hero, Felix, a soft-spoken window fixer. Players move Felix from one windowsill to another while fixing shattered glass and dodging a bevy of bricks hurled by the game’s temperamental villain, Wreck-It Ralph. However, as the film about Ralph demonstrates, there’s more to him than wrecking. By tapping into an increasingly common strain in American culture—particularly recent children’s culture—that seeks to reevaluate and demystify our “bad guys,” Wreck-It Ralph reminds us that some video game villains may be more complicated and less vile than they seem.

Traditionally, animated villains prove bad to their core. Disney, in particular, specialized in loathsome antagonists whose very names bespoke their vileness. The Big Bad Wolf in The Three Little Pigs (1933), Queen Grimhelde in Snow White and the Seven Dwarfs(1937), Cruella de Vil in 101 Dalmatians (1961), and Jafar in Aladdin (1992) were all jealous, plotting, and incapable of reform. Recent animated films such as DreamWorks Animation Studio’s Shrek (2001; sequels 2004, 2007, 2010) and How to Train Your Dragon (2010; based on the 2003 children’s book) broke from this pattern by confronting audiences with sympathetic portraits of a grouchy ogre and a misunderstood dragon who become unlikely heroes. In the worlds of these films, ogres can save princesses, humans can befriend dragons, and so-called villains can become heroes.

In the opening scenes of Wreck-It Ralph, Ralph tells us “It’s hard to love your job when no one else seems to like you for doing it.”  At 9 feet tall and 643 pounds, the professional “wrecker” is an intimidating presence and a Donkey Kong-esque classic video game villain. He spends his days smashing Felix and the Nicelanders’ apartment building and his nights sleeping next to a tree stump, alone, on a giant pile of rubble. Before long, we learn that Ralph is telling his story to Pac-Man’s Clyde, Super Mario Bros.’ Bowser, Street Fighter’s Zangief, and the other members of the “bad guy” support group BAD ANNON. When Zangief tells Ralph that being a “bad guy” doesn’t mean you’re a “bad guy,” Ralph confesses that he doesn’t “want to be the bad guy anymore.” Struck by Ralph’s admission, Clyde instructs Ralph to accept that “we can’t change who we are.” After Ralph is excluded from his game’s 30th anniversary party and told he’s “just the bad guy who wrecks the building,” he rejects his “bad guy” label and spends much of the rest of the film on a quest to prove that under different circumstances, he too could be a hero.

Ralph’s story in part reflects some changes among animated film “villains,” but it also opens up interesting avenues for filmmakers and game designers to explore. For instance, would more movies and games probe the psychological motivations of such classic video game villains as Clyde, Bowser, or Sonic the Hedgehog‘s Dr. Robotnik? What if these characters decided to play the role of hero? Sonic Adventure (2003) witnessed a temporary Sonic and Dr. Robotnik team-up to prevent world destruction and Mario & Luigi: Bowser’s Inside Story (2009) places Bowser unknowingly in the role of hero. Yet neither game offers players a better understanding of the villain’s true motivations. Perhaps we’ll see more games push these themes further, but in the meantime, I anxiously await a Wreck-It Ralph sequel that sends Ralph to new and “classic” virtual worlds.