Statistics sit at the heart of baseball. A hitter’s batting average predicts his success at the plate, a pitcher’s Earned Run Average measures his overall effectiveness, and a fielder’s rate of errors correlates strongly with his likelihood of making a play. Since computers prove effective tools for measuring probabilities and statistics, it is not surprising that some of the earliest applications of computers for game play involved baseball simulation. John Burgeson has donated the oldest-known computer baseball simulation, a game he created, to The Strong’s International Center for the History of Electronic Games.

As children, Burgeson and his brother Paul played board games that simulated baseball using boards, pieces, and randomizing devices such as spinners and dice to determine whether the player smacked a hit, walked, or struck out (game manufacturers such as McLoughlin Brothers and Parker Brothers created these games as early as the 19th century). They also played pinball-style baseball games. Later, as a teenager in the 1940s, Burgeson kept detailed records of his favorite baseball team.

After college, Burgeson worked as a computer programmer. Around Christmas in 1960, Burgeson caught the flu and stayed home from work at IBM. He used the extra time he had on his hands to combine his love for baseball with his knack for computers and created a baseball simulation. He and Paul were two of those fortunate few Americans of the era to have access to computers, and so they set about coding a baseball program in SPS (Symbolic Programming System), an assembler for the IBM 1620 mainframe computer.

The materials John Burgeson donated document his development of the game, including a printout of the early draft of the program, “The BBC Program … Known Also as the Baseball Demonstration.” While there’s no date on this early version of the code, Burgeson thinks it’s likely from late-December 1960. His original comments throughout the piece (e.g. “READY NOW TO ACCEPT VISITING LINEUP” and  “END OF 11 CODING THAT WAS A REAL SNAP”) explain clearly, if somewhat puckishly, what’s happening for the vast majority of us who have not programmed in SPS. His numerous handwritten amendations to the code show him tinkering with the programming to make the game operate the way he wanted it to. 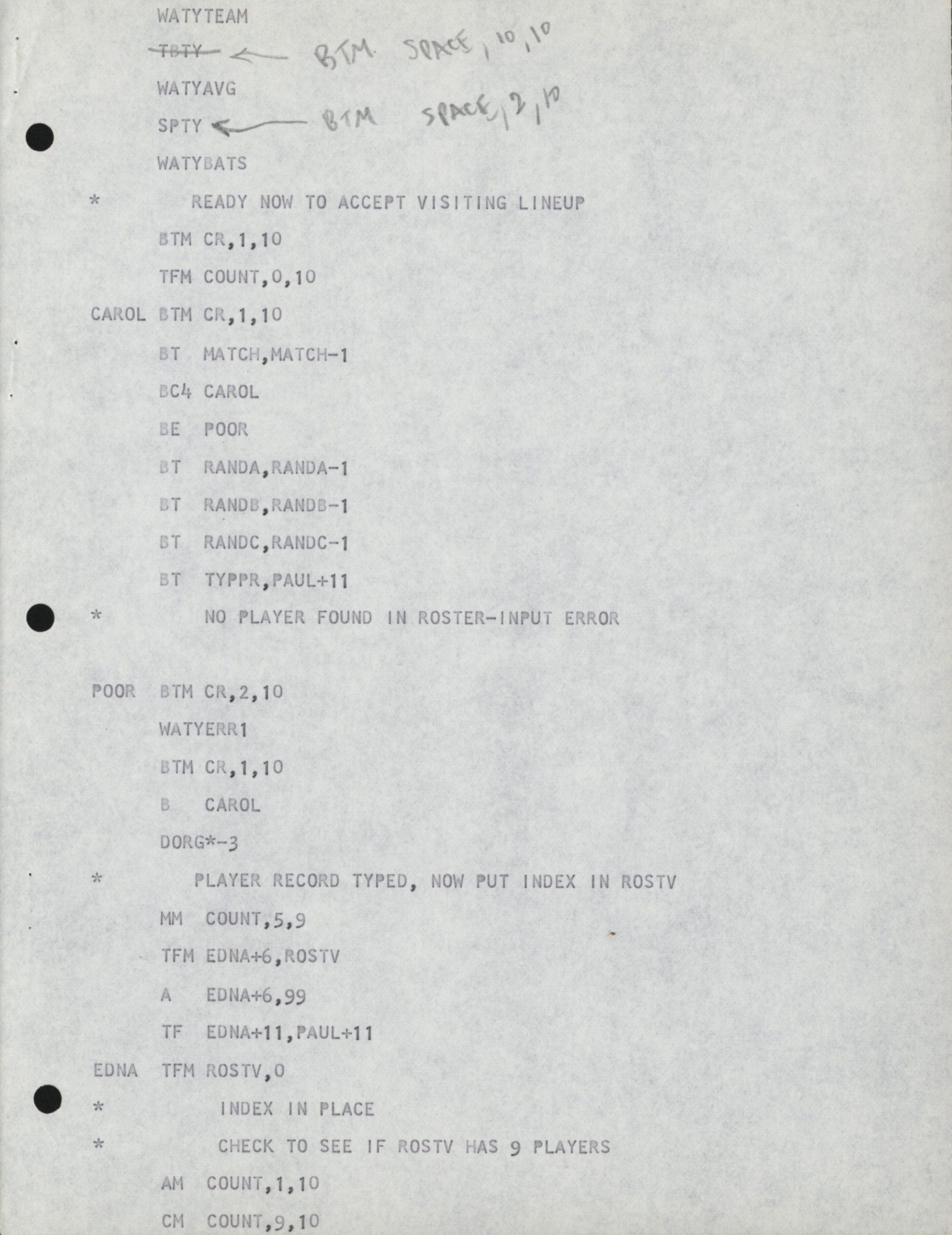 By 1961, Burgeson had the program working, and the material he gifted to The Strong includes various printouts of the game running. The 73rd-run of the BBC program, for example, featured an all-star match-up between such Hall of Famers as Earl Averill and Roger Hornsby on one team and Honus Wagner, Stan Musial, and Joe DiMaggio on the other. Burgeson loved that a computer allowed a simulated contest between all-time greats from different eras. In this case, Averill and Hornsby’s home team won, 12 to 8. The result was not surprising since Burgeson had stacked the home team with some fictional players who brought a .599 batting average into the game.  Perhaps he wanted to make sure that team won since it also included two players from the Cleveland Indians, his favorite club. 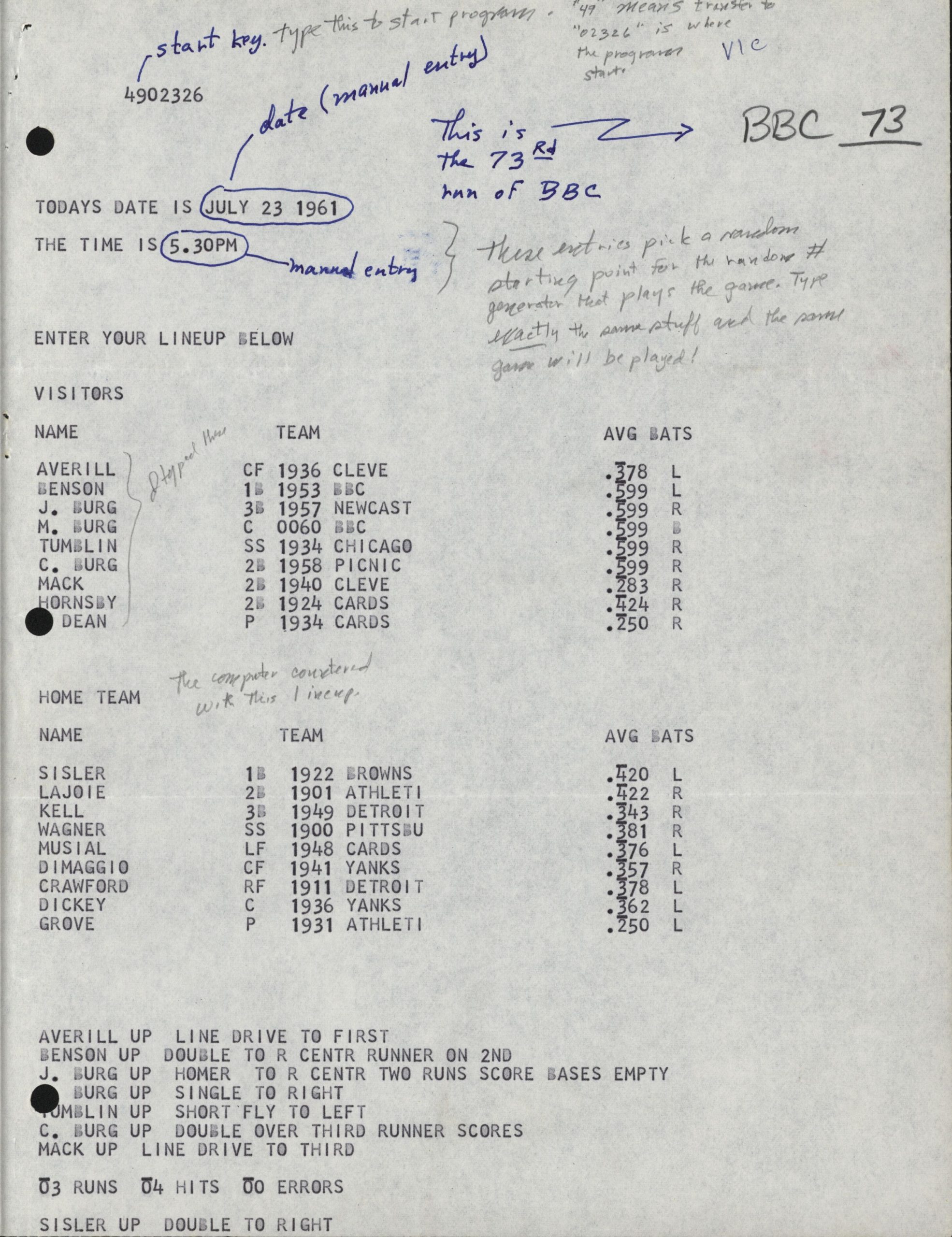 When Rege Cordic, a radio disc jockey from Pittsburgh, heard about Burgeson’s program he imagined the possibilities for a broadcast version of one of the games. He got Burgeson’s permission to record a game and pitch the idea to IBM. The recording effectively captures the flavor of an actual baseball game, even if the announcer’s fulsome praise of the 1620 computer was undoubtedly intended to convince IBM to endorse the idea.

Although the radio announcer was enamored with the prospect of a computer baseball game, IBM was less sure that a baseball simulator constituted an appropriate or serious enough use of their 1620 computer. Although the program had the capacity to educate non-computer users about what a computer could do, in 1963 Burgeson found himself writing to IBM’s Department of Program Information, requesting a reversal of the company’s decision to remove the program from the 1620 library. Burgeson noted in his letter:

“I am sorry you have felt it necessary to remove novelty type programs from the library. In the economic struggle for survival our company faces, some of these programs have proven exceptionally useful in demonstration concepts rather than a specific application in a context understandable by a layman. The Baseball demonstrator program has been used often in this manner to illustrate the concept of computer simulation. As such, I consider it of high significance to the programming community.”

The IBM corporate hierarchy’s suspicion of Burgeson’s baseball game foreshadowed the negative attitude of many corporate and educational institutions through the years towards the use of computers for game play. And yet, as Burgeson understood, often the best way of understanding how a computer works and discover new capacities for it is to play with it. 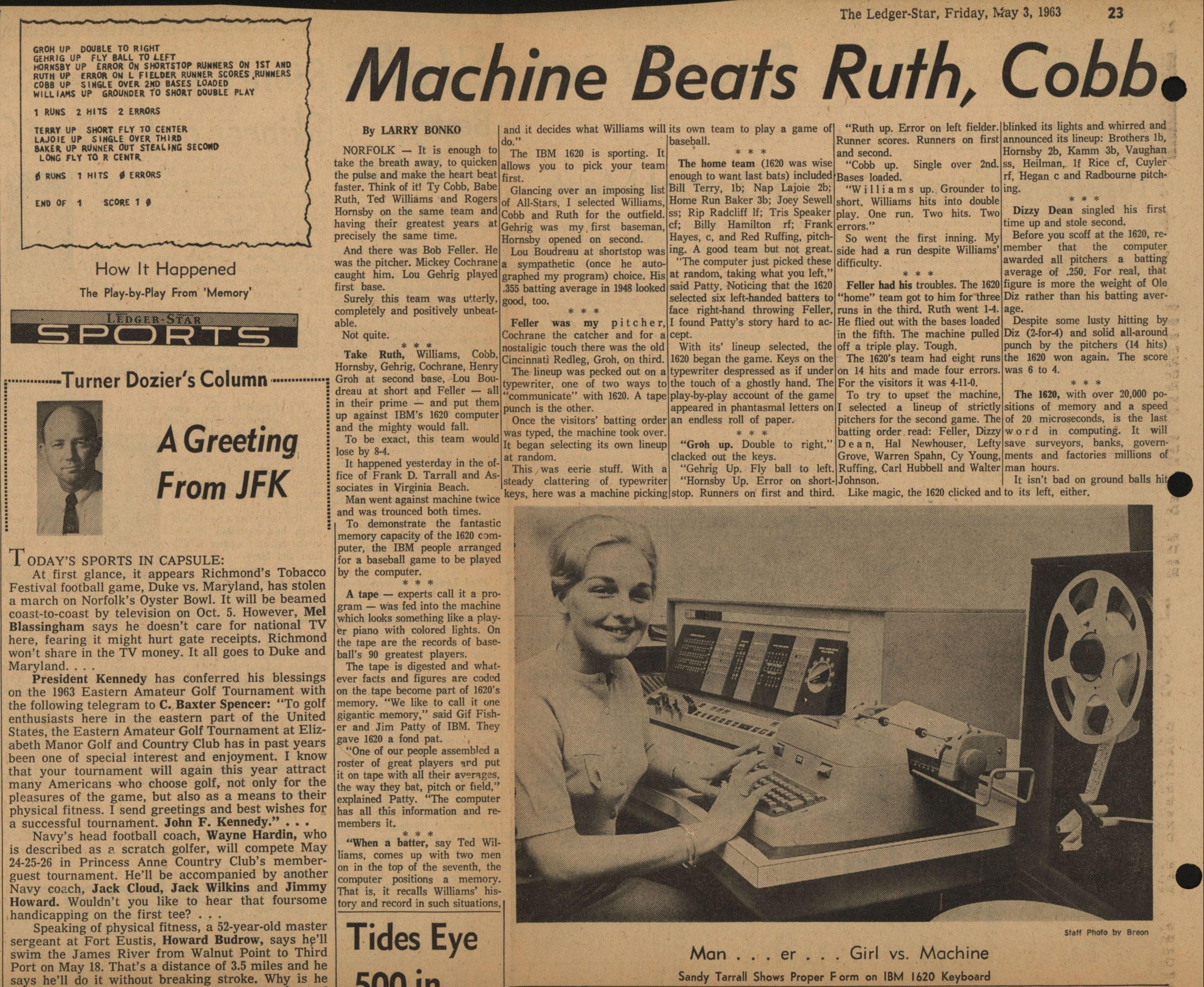 Today, there are hundreds of electronic baseball games, from high-res swing-fests like MLB 14: The Show to number-crunching simulations like Baseball Mogul. Despite their sophistication, these baseball games accomplish what John Burgeson did all the way back in 1961—take players out for a memorable trip to a ballgame that can be played anytime, anywhere, rain or shine. ICHEG is proud to preserve this pioneering work in The Strong’s collections.