The histories of tabletop games and video games are deeply woven together. Analog and digital games often share similar mechanics (such as experience points) or similar settings (e.g. dungeon crawling). Many times in the past, game makers have ported titles from one medium to the other. And yet perhaps the most crucial connection between analog and video games lies in the personal biographies of many game designers, who often began work with board games before applying their skills to the digital medium. The career of Paul Reiche III exemplifies these close, often interlocking relationships between analog and digital game design, and the opens in a new windowpersonal papersopens PDF file that he recently donated to The Strong demonstrate how his apprenticeship in designing tabletop games laid the foundation for his creative career in video game design. 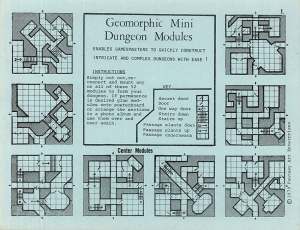 Paul Reiche grew up in Berkeley, California (though he spent many summers on a family ranch in Nebraska). California— and Berkeley especially— offered a heady mix of counterculture creativity and technological exploration. When I was in California collecting his materials, Paul told me about going to the New Games Festivals organized by Stewart Brand which featured large group play that represented a peaceful substitute for the violence of the Vietnam War. He also became a passionate Dungeons and Dragons partner and teamed with Erol Otus and Matt Genser to form a company selling playing aids for role-playing games such as a book of spells and a modular system for dungeon design that “enables game masters to quickly construct intricate and complex dungeons with ease!” 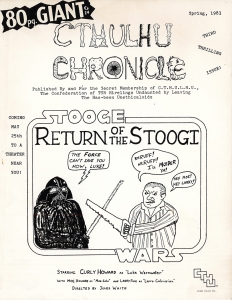 Attending the University of California at Berkeley was a logical move for a hometown boy, but shortly after enrolling Reiche decamped to Lake Geneva, Wisconsin, to work for the hottest game company in the country: Tactical Studies Rules (TSR), the manufacturer of Dungeons & Dragons. Reiche only stayed at TSR for a year, and when I asked him in an interview what Wisconsin was like after a childhood in California his response was immediate, “Cold! Really cold!” But at TSR he gained crucial experience in working at a large game company, contributing during his time to the development of the Advanced Dungeons & Dragons Dungeon Masters Guide and a module for the sci-fi role-playing game Gamma World. Even after leaving the company, he stayed in touch with many colleagues there. One very interesting piece in his papers is a newsletter created by alumni of TSR called the Cthulu Chronicle, which stood for “The Confederation of TSR Hirelings Undaunted by Leaving The Has-been Unethicaloids.” 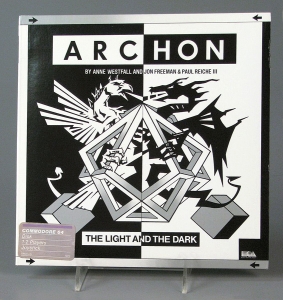 Paul returned to Berkeley and soon began work with Jon Freeman, Anne Westfall, and Robert Leyland on Archon, a variant on chess with an added layer of arcade combat. He also developed Murder on the Zinderneuf, of which he wryly notes that it is possibly the best murder-mystery game ever set on a dirigible. His career continued with games, including a collaboration with Evan and Mickey Robinson on Mail Order Monsters and World Tour Golf. He then tried his hand at early digital advertising for companies such as IBM, Chase Bank and BMW, making interactive experiences that companies would mail to customers on disks. Paul recalled wearing a suit in Detroit and thinking, “What am I doing? I need to get back into games.”

At that point he set about to start a new venture and find a programming partner, a path that led to the formation of Toys for Bob with Fred Ford. Part of the impetus for their partnership was when a programmer pulled out from a game Paul was working on called Elmo in the Fourth Dimension. Fred stepped in to finish the job and they have been collaborating ever since. While ELMO in the Fourth Dimension was never released, a notebook full of items from that game is included in the papers he has donated.

After signing a three-title deal with producer Shelley Day at Accolade, Reiche and Ford produced their hit game Star Control, which was followed by Star Control II. Once their contract with Accolade concluded and they were ready for a new style of game, Toys for Bob produced The Horde for Crystal Dynamics and other games such as 102 Dalmatians. In 2005, Activision acquired Toys for Bob, and the company created a number of movie-related games before developing the hit Skylanders franchise, something I wrote about opens in a new windowhere when Paul arranged for a donation to The Strong of a vast collection of materials related to the development of that pioneering game. 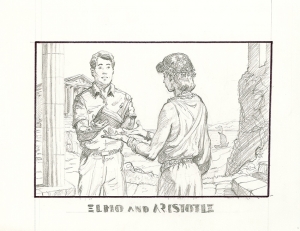 The materials in this present collection of Paul’s papers not only add to and supplement the Skylanders story but also provide important insights into the minds of an important game developer whose career has played a key role in the development of gaming. The materials include a wide range of primary-source documentation, such as sketches, design notes, correspondence, project planning documents, and random jottings that offer insight into how the games industry worked and the personal relationships that made it go.

Those seeking to understand the history of the medium—whether that’s how game designers came up with their ideas, how individual games were created, or how the industry advanced through a series of relationships that were often as much personal and playful as they were professional and profit-oriented—will find these materials an invaluable record for understanding the rise of computer gaming. Scholars 100 years from now will be grateful to Paul—as we are—for saving these papers and donating them to The Strong.