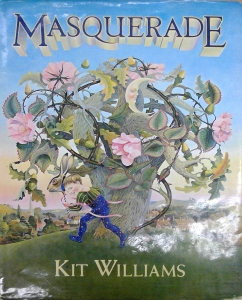 Whether we’re children or adults, there’s something irresistible about following a trail of clues (a map makes it easier and more fun) to some hidden cache that promises untold riches. Most often treasure hunts live only in the world of fiction—Treasure Island with its memorable characters Long John Silver, Jim Hawkins, Billy Bones, and Captain Flint—set the mold that has been imitated by countless books and movies such as Raiders of the Lost Ark, National Treasure, and Ready Player One.

Treasure hunts have been on my mind recently for a couple of reasons. First, the owner of Jelly Belly candies announced he was reprising the giveaway from Willy Wonka and the Chocolate Factory by hiding a golden ticket for searchers to find and potentially win a candy factory. Second, I was cleaning out the large supply of children’s books at home and came across my childhood copy of Masquerade, a book that inspired treasure seekers far and wide to try to decipher the messages encoded in the book of the same name. I hadn’t thought about Masquerade in a long time, and it turned out that there was more than one mystery wrapped in this story.

Artist Kit Williams illustrated and authored Masquerade, which was published in 1979, on the dare to make a children’s book that was different than anything that had been done before. In the pictures and text he embedded clues that promised to lead to an 18-carat gold jeweled rabbit that he had buried somewhere in the English countryside. I lived in Connecticut, but it didn’t stop me and my older brother from scouring the book for clues to try and solve the puzzles. We failed of course, but so did everyone else until 1982 when Ken Thompson solved the puzzles and discovered the rabbit. 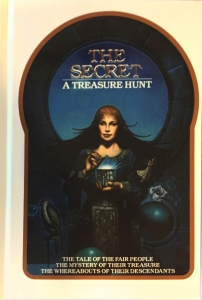 Ken Thompson then used some of the money and fame associated with it to co-found with John Guard a computer game company, Haresoft. Haresoft’s first and only product was a two-part game called Hareraiser that promised players that embedded in the game were clues to finding the rabbit from Masquerade. The game was universally panned and the company failed. That would seem to be the end of the story.

And yet over time it turned out there was further mystery involved, and like many a good treasure hunt story a rogues’ gallery of suspect characters. It turned out that Ken Thomas was in fact not a real person but a pseudonym for Dugald Thompson. Thompson was the friend of another man, John Guard, the co-founder of Haresoft. Guard had been dating Veronica Robertson, the ex-girlfriend of Kit Williams himself. They discovered the jeweled rabbit with the help of some metal detectors and Robertson’s tip that they should look on Ampstead Hill, a site she had visited with Williams.

Masquerade inspired other true life treasure hunts. In 1982, for example, the book The Secret: A Treasure Hunt put seekers on the quest of 12 treasure boxes supposedly buried around the United States. Not all have been found, so if you feel up to the challenge, you can track this down and perhaps discover the treasure. But watch out for villains along the way, for no true treasure is found easily!