Recently I was engaged in a heated match of pickleball. For those not familiar with the game, imagine it as a cross between tennis and ping-pong, played on a court about half the size of a tennis court with solid wood rackets and a perforated ball sort of like a Wiffle ball but with holes all over the sphere. Pickleball itself was invented in Washington State in the 1960s and in recent years has gained enormously in popularity, evidenced by the number of tennis courts that have now been striped to support the game.

Though a lifelong tennis and ping-pong player, I’m new to this relatively young racquet sport. At first it took some getting used to the different possibilities of spin and placement that apply, but now I’m starting to get the hang of it. I’m also learning the rules. And yet a recent experience reminded me that when learning a new sport, game, or any other element of play, you not only need to master the physical skills and formal rules but also the unwritten guidelines that players adhere to that govern conduct and the spirit of the game. 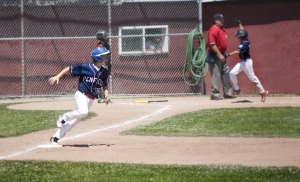 Many sports or competitions have these unwritten rules. opens in a new windowBaseball is notoriously full of them, ranging from not flipping the bat after smacking a home run to not mentioning the fact that a pitcher has a no-hitter going. The latter injunction is largely superstitious—and baseball is full of superstition—but the mandate against flipping your bat has more to do with not disrespecting the other player, i.e. not riling him up too much by making him lose face. In a major league baseball game the result might be a fight and a player or players being ejected, but I think the deeper root is an older one that goes back to neighborhood ball games, the desire to keep the game going.

The psychologist Peter Gray talked about this in an opens in a new windowarticleopens PDF file he wrote for the American Journal of Play entitled “The Decline of Play and the Rise of Psychopathology.” In it he noted that one of the primary goals of play is to keep playing (because it’s fun), and therefore players learn to modulate their behavior to make sure that nothing interrupts the play. Indeed, one of the benefits of self-organized play by children is that they learn these crucial skills of negotiating social relations, something that organized sports with adult referees don’t necessarily teach as well. Interestingly, that doesn’t necessarily foreclose cheating—as the distinguished play scholar Johan Huizinga points out, players resent a spoilsport (who breaks the play) much more than a cheat (who bends it). That certainly means not being a jerk (since it’s likely to provoke a fight that will spoil the game) but it also might mean self-handicapping your own play by, for example, playing easier with someone who is not as skilled or as physically fit. It also means obeying the spirit of the game, that vague awareness of how a game is meant to be played.

That brings me back to pickleball. As I said, I’ve been a lifelong player of racquet sports, so while not necessarily the best player on the pickleball courts I am able to transfer the skills from one to another. There’s a lot of net play in pickleball—something I excel in at tennis—and so I’ve gotten better at hitting shots such as overhead lobs. Just such a lob presented itself in my last game, and I took advantage, smashing it at the foot of one of my opponents. It was an unreturnable shot and, for a brief moment, I felt good about hitting a perfect slam.

And yet immediately afterwards I also felt a twinge of guilt. The shot, after all, while perfectly legal and beautifully executed somehow didn’t seem totally right. I sensed it perhaps violated what the spirit of pickleball was. Unlike tennis which is highly physical and in which players are usually fairly far apart, pickleball is played in tight quarters and requires much less physical exertion. Part of its surge in popularity is probably because of the overall aging of the American population—older knees find the game much more forgiving than tennis. As a result, it has a more decorous, less cutthroat air than tennis (which in itself is much more polite, at least on the surface, than a pickup game of basketball). My slam, while a great shot, felt “off” to me. Turning to my partner in that game—the most experienced pickleball player among us—I asked him, “Was that kosher?” His gentle reply was, “Yeah, but we don’t hit that to X [and here he named the oldest player in the group].” He wasn’t rebuking me, but I took the tenor of his tone to mean that I should ease up a little. While my shot was in play, it was perhaps out-of-bounds in a deeper sense. Certainly, if I kept playing like that (i.e. being a jerk) it would dampen the desire of others to play, making it hard to get and keep a game going. I would be, in effect, a spoilsport.

Players in almost any arena of play—even virtual ones—must navigate these unwritten rules, and video game researchers have been particularly interested in exploring this territory. The scholar T. L. Taylor in her book Raising the Stakes describes the navigation of written and unwritten rules that happens in even new forms of play like eSports. Mia Consalvo considers such rule negotiation in her book on computer games, opens in a new windowCheatingopens PDF file . Another book, opens in a new windowMetagaming: Playing, Competing, Spectating, Cheating, Trading, Making, and Breaking Videogamesopens PDF file by Stephanie Boluk and Patrick Lemieux reminds us that there’s much more going on when we play than just the action on the screen itself. The metagame is often more important than the actual game.

That’s because in the end, whether we’re playing a video game, baseball, or pickleball, we have to remember that there’s often a game within a game. What’s happening on the screen, field, or court at any given moment is only one small part of the big arena of play. Winning a point may actually mean losing touch with what the game should be all about in the end: everyone having fun.