Floppy diskettes are an incredibly volatile medium. Available in multiple shapes, sizes, and formats, the magnetic disks were often used, rewritten, and eventually tossed aside as new methods of data storage arrived. Disks by their very nature are disposable, and younger generations may only recognize a floppy disk as a save icon. With some experts estimating the lifespan of a floppy disk at 10 to 20 years under the best conditions, many pieces of software, including games, are at risk. 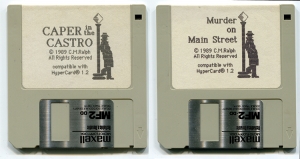 Caper in the Castro is thought to be the first ever LGBTQ electronic game. It was designed by opens in a new windowCM Ralph in 1989 and released on bulletin board systems as Charityware—Ralph wanted people to donate to an AIDS charity of their choice instead of paying for the game. In the game, you are the world-famous lesbian private detective, Tracker McDyke, searching for a kidnapped drag queen, until you stumble onto an even larger and more treacherous crime.

At least, that would have been the story. In the years since the game’s release, it had all but disappeared, with only a few mentions indicating that the game had ever existed, despite some estimates that the game could have had upwards of 250,000 downloads. Its distribution through BBS meant that if any physical media such as floppy disks existed at one point in time, it was likely rare that any would survive. Later, Murder on Main Street, a version of the game that was rewritten to feature a heterosexual storyline, was distributed by Heizer Software via mail order catalogs. As of 2014, both versions of the game were thought to no longer exist. An important piece of LGBTQ history was lost. 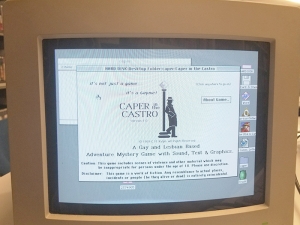 In October 2017, Adrienne Shaw, professor at Temple University and founder of the opens in a new windowLGBTQ Game Archive, reached out to The Strong. Ralph had found original floppy disks of both Caper in the Castro and Murder on Main Street. However, there was still the issue of accessing the data.

As one of the newest hires at The Strong, my job as the digital games curator is to work through issues of digitization and preservation of games. Ralph had loaned the diskettes to the museum so that we could attempt to preserve the titles properly, but initial attempts at backing up the software failed. Apple liked to create unique configurations for their floppy disks, and in this case the Macintosh disks used a 400/800k format, which unfortunately meant that PC hardware couldn’t read the disks, nor could newer Macintosh hardware.

I then took a multi-pronged approach to the task. Using a piece of hardware called the Kryoflux, I was able to create a preservation copy of the disk that could then be converted into the proper image format. I also used Disk Copy on original Macintosh hardware, using native Macintosh software to create an image that was immediately accessible. After installing HyperCard, the software that was used to design the games, both titles sprang to life, perhaps for the first time since the early 1990s. 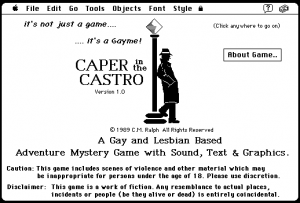 The Strong’s International Center for the History of Electronic Games (ICHEG) is honored to preserve digital images of both Caper in the Castro and Murder on Main Street in its collection. These titles are also available in your browser on the opens in a new windowInternet Archive. Donations like this support the museum’s mission to collect, preserve, and interpret the history of electronic games. Researchers interested in exploring these games as well as other collections at The Strong, such as the Brøderbund Collection, the Ken and Roberta Williams Collection, the Brian Fargo Papers, and others will find invaluable resources for studying the game industry.