In the 1970s, a group of gaming friends added the concept of role-playing to the previously straightforward play of war games. Gamers Gary Gygax and his associate Jeff Perrin published instructions for Chainmail, a medieval war game, in 1971. This game differed from all other published war games by including a fantasy supplement based in part on the increased cultural interest in the works of fantasy authors such as J.R.R. Tolkien and Robert E. Howard, author of the Conan series. Chainmail’s publishers, somewhat defensively, wrote, “Special features include rules for jousting wizards, trolls, hobbits and (why not) dragons, among others.”

Before 1971, Gygax was a member of the Castle and Crusade game society, which utilized his medieval setting, the “Great Kingdom,” for war games. Fellow gaming enthusiast Dave Arneson joined the society and developed a modified city and castle scenario within that setting. When Chainmail was published, Arneson used those rules for a modified campaign as a Chainmail variant, which included a dungeon of several levels beneath the castle. And Gygax, playing Arneson’s game, enjoyed it so much that he asked Arneson to write down the rules for him. Working with approximately 20 pages of notes from Arneson, Gygax tried, in 1973, to put the game instructions and layers of complexity in layman’s terms and in the process developed the outline for Dungeons & Dragons.

This new style of game featured a “referee” (later called the Dungeon Master) who narrated the story as the game unfolded and used dice to determine each character’s traits and strengths, as well as the outcome of challenges, battles, and events encountered during play. Gygax and Arneson continued to play the game with friends, testing new ideas as the games progressed. With the help of two fellow gamers, Gygax published the game they had developed and also founded the game development firm Tactical Studies Rules (later TSR Hobbies) in the process.

The first edition of Dungeons & Dragons sold as a sort of accessory or extension to Chainmail. However, the new game possessed one crucial difference from the complex war games that preceded it. Instead of playing the part of a regiment, or a country, with armies to command, each player took the part of a character, interacting with other players, non-player characters, and events within the environment of the game. Nothing quite like Dungeons & Dragons had ever existed before. Like many new games, it first found an audience on college campuses and word started to spread. By the early 1980s, many adults played Dungeons & Dragons, and high school students learned the game too—eager to share its adventurous play with their friends . Dungeons & Dragons’ popularity peaked during the mid-1980s and early 1990s, inspiring competition from other firms that utilized similar gaming mechanisms but different settings, from outer space to the Wild West. 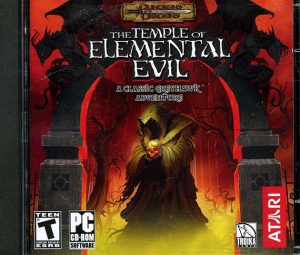 With the increasing use of personal computers, role-playing games, exemplified by Dungeons & Dragons, played a key role in the development of computer gaming. The computer could play the part of the dungeon master, crunching numbers to quickly determine character traits and deciding the outcome of encounters without needing to roll any dice. And as the Internet grew, people had even more fun role-playing in a virtual environment, with thousands, and then millions, of other players interacting at the same time.

At the height of Dungeons & Dragons’ initial popularity during the 1980s, certain non-player groups criticized the game. Without understanding it, they assumed that somehow a game in which the players assume roles in a fantasy world inhabited by monsters and evil creatures of legend must then be evil itself. And they accused it of exerting mind control, or worse, over unsuspecting or naïve youth. But supporters of the game, including teachers and parents, quickly disproved these groups’ misguided and unwarranted claims and pointed to the game’s beneficial aspects.

Many players enjoy Dungeons & Dragons today, and some true fans have been involved in a single ongoing game, or campaign, for years. And what are some of the game’s virtues? Players must communicate and cooperate with each other during play. They must read complex manuals, tell good stories, calculate tricky probabilities, and solve mind-bending problems, ultimately leading to creative thinking and teamwork. But—just ask any player—the game is also fun! Parents, scholars, and teachers all agree that the basic social aspect of Dungeons & Dragons improves socialization skills and helps to strengthen and cement friendships. The game allows older children and adults to play in a fantasy setting, not unlike the imaginative and pretend play of young children. Dungeons & Dragons led the way to a completely new, multifaceted, and fantastic kind of play. This innovation, besides all the game’s other merits, earns it a place as a 2016 inductee to the National Toy Hall of Fame.

Categories: Classic Toys of the National Toy Hall of Fame, People at Play