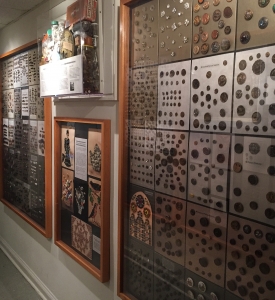 For as long as I can remember, I have been fascinated by buttons. Often small and unassuming, these objects may blend into their surroundings and often go largely unnoticed. And yet they serve a critical purpose to hold things together or keep things in place. It may be a stretch, but I tend to think my love of buttons may be a character trait I inherited—genetically or otherwise—from my grandmother. Born and raised in Massachusetts, she had the quiet demeanor and strong work ethic often associated with New Englanders of her generation. She was talented in many ways, cooking, pressing flowers for lampshades and, of course, sewing. That meant she never tossed a button out, but rather kept each one, carefully stowing them away in an old silver coffee can kept on the bottom shelf of the sewing closet in her quaint lakeside home. Whenever we would visit, my first priority was to retrieve the button tin from the closet, immediately dump the entire thing onto the middle of the living room floor, and carefully comb through the contents to see if anything new had been added since my last visit. Looking back, it is unlikely that I actually noticed any new buttons unless they were exceptionally large or ornate (not exactly grandma’s style), but there were certainly a few tried and true favorites that I always delighted in finding. 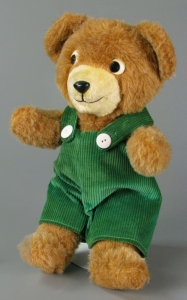 So what it is about buttons that intrigues us? Is it the multitude of colors and shapes? Is it the array of sizes, from the teeny tiny to the big and bold? Buttons are by nature functional but have become a significant element of design over the years. A strategically placed, well designed button can act as the striking detail that makes a garment special or gives it the finishing touch. Or, if you are Corduroy the bear, a missing button on your overalls can lead to quite the adventure and a major life change. Alternatively, buttons can replace a missing eye (or two) on a favorite toy. Of course, they also make great crafting supplies for people of all ages, proving useful for making flowers, colorful creatures, jewelry, art, or anything else imaginable. Artist opens in a new windowTara Donovan uses vast quantities of common household objects to create sculptures that often fill an entire gallery. The result is astonishing. The transformative power of repetition on a grand scale brings simple items to life, captivating audiences. Among Donovan’s favorite materials? Buttons. Her popular piece, Bluffs, has been exhibited at numerous museums and galleries since the early 2000s, and showcases buttons in an entirely new and different light.

Button enthusiasts and collectors are hardly alone. The opens in a new windowFlagler Museum in St. Augustine, Florida, has a large collection, many of which are framed and displayed along a wall for guests to marvel at. A quick internet search for “button museum” brings up an array of roadside attractions dedicated to the tiny treasures, including that of the self-proclaimed opens in a new windowButton King, Dalton Stevens in South Carolina whose collection began in 1983 and now occupies an entire hangar. Even if you don’t have an upcoming road trip planned, there are plenty of pictures to enjoy with just—wait for it—the click of a button. 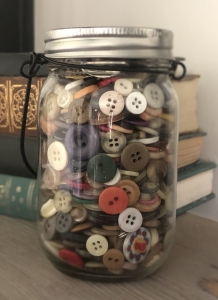 When my grandmother died in the late 1990s, “the button tin” made a source for fond recollections as we gathered with family. While much has changed in my life during the more than 20 years since then, it seems my affinity for buttons has not. Over the years, each time I found a rogue button I would set it aside and think to myself That might be useful, best hold on to it. The result was countless buttons stowed here and there, until one day, not so very long ago, I thought it would probably make more sense to put them all into one spot—so into a plain glass jar they went. Only when I put the lid on and placed the jar on a shelf did I realize what I’d created:  my very own “button tin.” I like to think my grandmother would be proud. Now if only I could sew. . . .