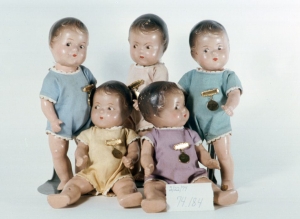 In The Strong museum’s storage, there are five identical baby girl dolls, all dressed alike in pretty pastel colors. Their painted brown hair, curled lashes, and red lips, might make you think they were an average bunch of composition dolls from the early 1900s. The first time I laid eyes on them, however, I knew exactly who these girls were.

When I was in high school, one of the teenage phases I went through was watching and re-watching documentaries and made-for-television movies about the lives of 1930s and 40s Hollywood stars, such as Shirley Temple, Judy Garland, and Lucille Ball. I was way too school for cool. During one of the umpteenth movie viewings, I stumbled upon a TV movie called Million Dollar Babies. As I watched, my eyes were opened to a moment in history I had never known existed.

In 1934, the first identical quintuplet babies to ever survive infancy were born. The New York Times reported the odds of identical quintuplets to be one in a billion. Born two months premature, the total birth weight of Yvonne, Annette, Cecile, Emilie, and Marie combined totaled less than 14 pounds! Amid the struggles of the Great Depression, the miracle birth and survival of quintuplets seemed a sign of great hope to people around the world. The quintuplets were born in a small Canadian town to Oliva-Edouard and Elzire Dionne, a poor, young couple already parents to six children when the quintuplets arrived. The surprise birth brought reporters, photographers, and the Ontario government, who quickly claimed custody of the quints and made the girls wards of the state, officially with the purpose of ensuring the quintuplets’ survival and sparing them from exploitation.

Under the guardianship of their doctor, the babies moved from their family home to a nursery in Quintland, a tourist attraction where the public could view them in a zoo-like enclosure. More than three million people, including Hollywood stars such as Clark Gable, Jimmy Stewart, and Bette Davis, visited Quintland and watched the girls play behind glass walls. During this time, the girls became the most photographed children in the world and were even featured in Hollywood movies. Their images appeared on the covers of magazines and their likenesses were licensed to sell all kinds of products, foods, and souvenirs, including dolls—so many dolls that the quint dolls actually outsold Shirley Temple dolls! 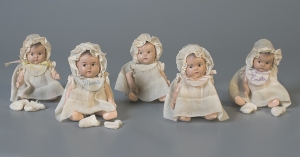 It’s a clever juxtaposition: five adorable babies and a money-making scheme, a marketing magic trick. The magician’s assistant distracts the crowd with cute baby girls in pretty dresses and all the while the magician performs his trick in plain sight, profiting off the exploitation of children. It’s easy to get caught up in appearances and believe that the things see with our own two eyes must represent the truth. But the mass-produced products selling the smiles of babies and the troubled lives the quintuplets endured because of profiteers remind us to think beyond the surface of a toy or a product. Ask questions. What are we are being sold and who is profiting from it? What are we being distracted by? What are we not supposed to see?

There is always more to a doll than just a pretty face.