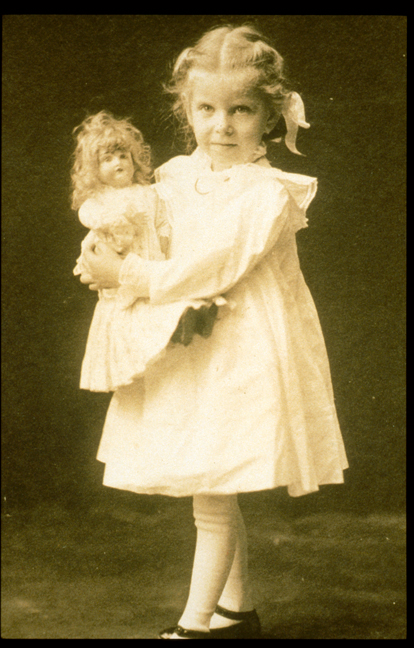 Some years ago, I watched Maggie Jane, my four-year-old niece, play with a few of her toys. She was seated on the living room floor, surrounded by talking adults who occasionally directed questions to Maggie about things like her preschool and her swimming lessons. Maggie respectfully answered their questions, but she was clearly engrossed in playing with her Barbie dolls and the plastic giraffes from a zoo play set. She had paired them—one doll with one giraffe—and made up stories as she went along about what the dolls and giraffes were doing together. One pair marched around her like they were on parade, another apparently talked about an amusement park Maggie often visited, a third pair seemed to be sharing a meal. Maggie had created a world of Barbie and giraffe playmates that gamboled about in harmony and bliss. 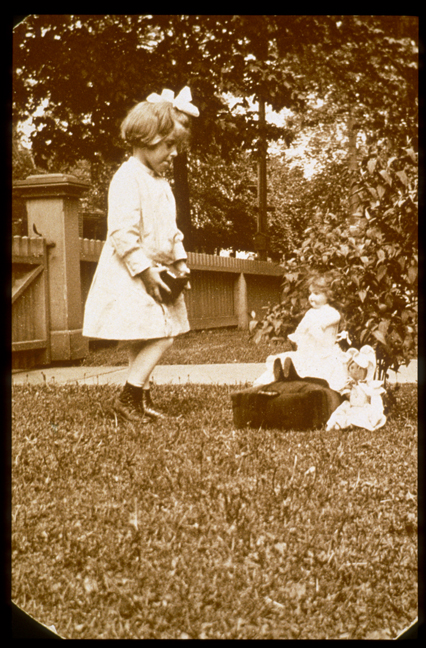 None of the adults in the room understood why Maggie had arranged her playthings as she did. I’m sure that the manufacturers of the dolls and giraffe figures would have been quite puzzled by Maggie’s play. Most adults, like the toy companies themselves, have definite ideas about how children should play with toys but, when it comes right down to it, the kids who do the actual playing couldn’t care less about the “right” way to play. They have their own ideas.

At the museum, we are delighted when donors offer us the playthings from their pasts. But we’re even more delighted when they describe for us how they actually played with these toys. Usually, we find, children play with toys in ways very different from what we might imagine. 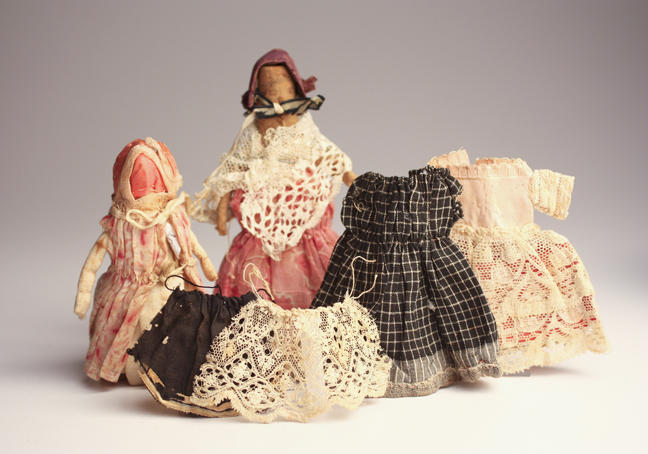 Take, for instance, the playthings that belonged to Phoebe Ann. We received a donation of a twenty-six-inch doll, two smaller dolls, doll clothes that appear to be the work of a girl learning her stitches, fabric scraps likely intended to become doll clothes, and a wooden trunk in which all the clothing and fabrics were stored untouched since Phoebe’s death in 1931. Phoebe was born in 1842 and probably played with her dolls in the 1840s and 1850s. The larger doll itself and the clothes made for it show the work of a practiced seamstress. But the smaller dolls and clothes show stitching done by a seamstress-in-training. 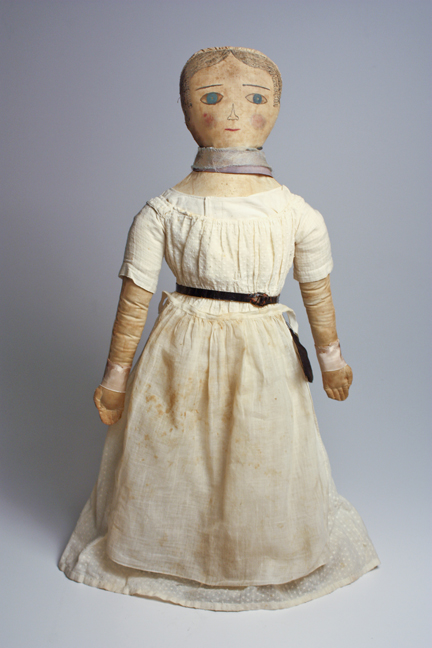 We know from social historians that many young girls in the eighteenth, nineteenth, and early twentieth centuries got dolls as gifts just so they could make clothing for them and perfect the sewing skills they’d later need as wives and mothers. It’s easy to imagine that Phoebe made the smaller dolls and the clothing stored with them. But did an older, more-skilled Phoebe stitch the larger doll and its clothes? We don’t know for sure, but the variety of fabrics with a few clumsy stitches, other clothes with more skilled stitching, as well as completed, expertly stitched clothing, fit the historical pattern of a girl like Phoebe mastering her sewing skills by playing with dolls.

Growing up in the 1930s, Ann played with her dolls in quite a different way. Ann donated her favorite doll, Susan, to the museum along with a charming little booklet called “My Family.” The pages of the book contain hand-written biographies of the twelve dolls Ann played with when she was young. The descriptions of her dolls are filled with imagination. Her writing reveals a good sense of discipline and organization: each entry includes the doll’s birth date, height, weight, disposition, wardrobe, what foods she likes, and the trips she had taken with Ann. Ann’s booklet shows how children use their playthings to reflect the adult world in manageable chunks. 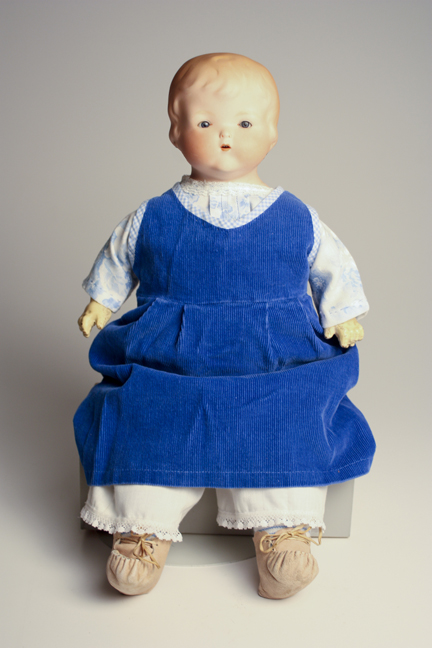 For instance, of her doll Susan, Ann writes: “Susan is healthy and has never been ill. She eats everything and sleeps soundly. She has a sweet disposition and likes to be quiet. She is a favorite.” Might these attributes be the very ones young Ann was encouraged to demonstrate? No wonder Susan was a favorite.

Ann’s other dolls were not always so perfect. Of her Patsykin, Ann noted: “Patsykin is kind of fussy about eating. She does not like cereal, vegetables, or eggs much, but she is learning to like them because she has always been made to eat them.” In the story about her Raggedy Ann doll, young Ann noted that this doll also “fussed a good deal about eating vegetables but ate everything else.” Ann’s booklet suggests that the young girl had definite opinions about vegetables and expressed her opinion in a way acceptable to both her and her parents. 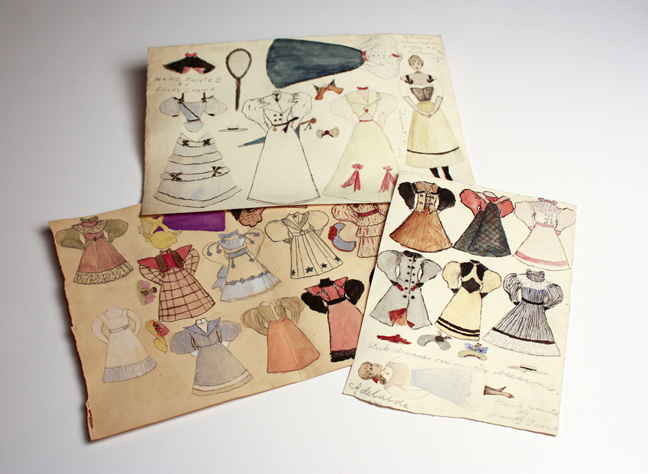 Jane grew up in the last decades of the nineteenth century. An only child living in a house filled with adults, Jane created her own play companions of the paper dolls she drew and colored herself. Jane made paper dolls to reflect two families that lived on her street. The families had mothers, fathers, and several children who played together. Jane’s fantasy family life was unlike her own. Looking back on her paper doll families, Jane wrote:

When I was very young, Mrs. Weston and Mrs. Carew loomed large in my life. They lived next door to each other and had very interesting families.

You see, Mrs. Weston and Mrs. Carew lived side by side in the figured squares on the Brussels carpet that graced my grandmother’s parlor. Mrs. Weston and Mrs. Carew were paper dolls who inhabited a large section of the small girl’s world. Each lady was a beautiful head fasted on a long slip of paper with a neat wad of beeswax just beneath her chin. Her wardrobe was lavish, and each beautiful gown was pressed onto the beeswax button. Voila! My lady was ready for the ball. The Weston and Carew children had beautiful clothes too-and what fun those two families had working together, playing together, and going to the seashore, where they stayed at a cottage and took their meals at the hotel.

Kids, past and present, play with dolls for their own, sometimes mysterious, ends as well as the ones envisioned by doll makers or the adults who buy the dolls. This play can be both useful and fun all at once. In fact, that’s what makes it play.