Well, she sneaks around the world from Rwanda to… Rochester?

Gumshoes first began pursuing this particular master thief in the 1985 release of Brøderbund’s Where in the World is Carmen Sandiego? Developed as a game with a menu-driven interface (replacing the standard text-driven applications of early 1980s computer games), Carmen Sandiego evolved into an educational game that made learning geography fun for millions of school-aged students. Brøderbund programmer Dane Bigham was originally inspired by the text game Colossal Cave Adventure to create a graphical, streamlined adventure for children. Artists Lauren Elliott and Gene Portwood teamed up with Bigham, along with scriptwriter David Siefkin, shaping the initial idea (a cops-and-robbers theme) into what would become one of the best-selling edutainment games in history.

First released on 5¼” floppy disk for play on graphic-enabled personal computers such as the Apple II, Carmen Sandiego introduced new audiences to celebrated world landmarks, exotic countries, and punny henchmen. Players, working their way up the ranks as agents of the ACME Detective Agency, hunted down crooks employed by V.I.L.E., an international group of thieves led by the mysterious Carmen Sandiego, who have stolen famous creations from around the globe. The player works one case at a time, beginning a game by first traveling to the country where a robbery has occurred and receiving hints about the thief’s next destination. (Referencing The World Almanac and Book of Facts, distributed along with the game, was highly encouraged.) If the player heads to the correct location, a simple animation of a V.I.L.E. henchman crosses the screen as confirmation; but, if the wrong locale is chosen, the player then has odd interactions with innocent bystanders and must backtrack to the previous country. There is a limited amount of in-game time to travel, collect clues, and eventually arrest the thief. When only one suspect remains, an arrest warrant is issued, and the correct criminal may be apprehended at the final destination. Case closed! After solving enough assignments, the player becomes eligible for promotion within the ACME agency and earns the chance to capture Carmen Sandiego herself. 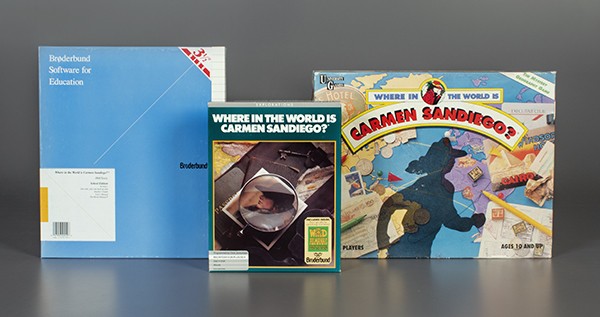 Within a decade, the first Carmen Sandiego game had sold more than 4 million copies: a number markedly boosted by teachers hunting for classroom-friendly educational games. The surprising success of Where in the World is Carmen Sandiego spawned an entire series of geography-based games from Brøderbund, including versions set in the United States, Europe, and even—strange as it may seem—North Dakota. (Further spin-offs gave “ACME agents” the opportunity to play titles focused on history, language arts, or math.) Carmen’s mythos grew along with the franchise, gaining her iconic red trenchcoat and fedora along the way. And, of course, children of the 1990s could also watch this game spring to life on the award-winning television game show Where in the World is Carmen Sandiego?, which aired on the American Public Broadcasting System from 1991–1996 (and introduced the one of the catchiest a cappella songs of all time).

The name “Carmen Sandiego” persists in the zeitgeist today. Between the still-growing video game franchise (including a Google Earth tie-in), and Netflix’s popular Carmen Sandiego animated series that launched in 2019, Carmen is as recognizable as ever. Is she an evil villain or a misunderstood genius? You’ll have to track her across the globe to find out! Tell me, where in the world is Carmen Sandiego?

The original Where in the World Is Carmen Sandiego? manual states that the international thief loves tacos, drives a 1939 Packard convertible, and is called “Buffy” by other members of Villains International Legion of Evil (V.I.L.E.).

opens in a new windowBeyond the Oregon Trail: Six PC Franchises that Helped Us Learn

Satisfy Your Wanderlust with These Video Games