Tetris is a truly international game that’s been persistently popular around the world because its rules are simple but its play possibilities are endless.

The challenge seems straightforward: rotate and move falling shapes in order to complete solid horizontal lines that then disappear. The pieces vary in shape and, as the game continues, they fall ever faster, stacking on top of each other and forcing the player to try to fit them in before the lines fill to the top. 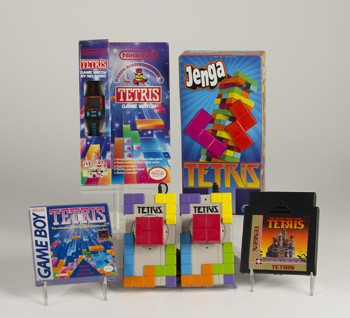 Tetris emerged from the pleasure Alexey Pajitnov, a programmer from the Soviet Union, experienced trying to solve pentominoes, a mathematical puzzle in which players try to fit variously shaped pieces into a rectangular box. In 1984 he adapted the puzzle for computers by challenging players to arrange seven different shapes into complete rows as they fell down a chute and named his new creation Tetris, a combination of “Tetra” (Greek for four, since each piece was arranged out of four squares) and “Tennis.” 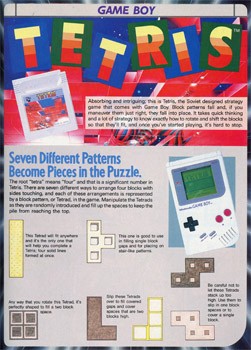 The game spread to other Eastern European countries and then in 1987 launched on PCs in North America and Europe—the first step in its global expansion beyond the Soviet Union. A rollicking Russian folk tune gave it an unforgettable soundtrack. And when the Japanese video game developer Nintendo packaged it with the debut of the Game Boy handheld system in 1989, it became an unforgettable part of popular culture the world over.

Since then, hundreds of millions of people have purchased the game. Today it’s found on arcade games, consoles, personal computers, handheld devices, and mobile phones. People have even projected it onto the side of skyscrapers! It’s a timeless game that works on every platform in every corner of the earth.

Tetris contains one of the most well-known theme songs in video game history. Known as “A-Type” in the game, “Korobeiniki” is a 19th Century Russian folksong about a peddler courting a young woman.