California-based developer Blizzard Entertainment began development on StarCraft in 1995. The real-time strategy genre was not new for the company, having released Warcraft: Orcs & Humans in 1994 before quickly following up with a sequel titled Warcraft II: Tides of Darkness in 1995. Released in March 1998, StarCraft was more than just Warcraft in space, as the game added a new twist to the strategy formula while leading a revolution in multiplayer gaming.

Set in the 25th century, StarCraft’s campaign follows the Terrans, humans who have been exiled from Earth, as they colonize the far reaches of the Milky Way galaxy. In their exploration, the Terrans encountered two alien species. Insectoid aliens called the Zerg aimed to assimilate other species that they encountered. The Protoss try to stop the Zerg who had begun to invade Terran worlds. The single-player mode is split into three episodes, each featuring one of the three races.

While the reception to StarCraft’s single player campaign was positive, the game is perhaps best known for its multiplayer mode. StarCraft utilized Blizzard’s online service Battle.net, which was one of the first online services to connect players across different multiplayer titles. In addition to the ability to chat with other players and join a multiplayer game, a ladder ranking system allowed players to see how they stacked up in comparison to their opponents. Players quickly flocked to the service, with numbers rising dramatically after the release of StarCraft. Over 50% of total sales of the game have come from South Korea, outnumbering sales in the United States. 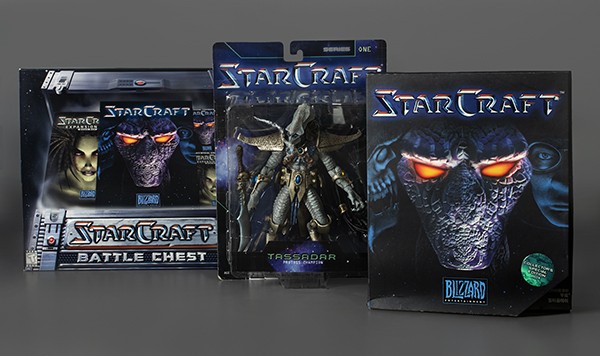 Unlike many RTS games of the time, where opposing sides are mostly on equal footing, StarCraft’s races each have vastly different abilities and strengths. This required players to develop unique strategies depending on the race that they chose and their opponents’ selections. Different techniques emerged as players gained experience battling online. For instance, players took advantage of the Zerg race’s ability to quickly produce large numbers of units. A Zerg Rush uses that early advantage to overwhelm players of other races, with the goal of ending the game shortly after it began. The idea of a Zerg Rush went viral, becoming synonymous with the idea of quickly rushing the enemy. Searching for “Zerg Rush” on Google revealed an Easter egg mini game that drew inspiration from the technique.

StarCraft became the largest esports title of its time. Millions were able to watch players compete, with South Korea broadcasting games on cable network. Its popularity in South Korea led to the launch of the Korea e-Sports Association in 2000 to officially sanction and organize tournaments. Even 10 years after the game’s release, StarCraft held its place as one of the most popular online games.

StarCraft won multiple Game of the Year awards and is regarded as one of the best real-time strategy games of all time. An expansion to the game titled Brood War was released in December 1998. It added new single-player campaigns, new options for maps, and extra units and upgrades for existed races. In addition to ports to Mac OS, StarCraft was ported to Nintendo 64 in 2000, though it lacked the online multiplayer of the original. StarCraft II: Wings of Liberty was released in July 2010, with additional expansion packs adding even more content to the long-awaited sequel. Blizzard expanded the lore of the game with a series of novels and graphic novels, and expanded the games reach with licensed toys, clothing, and gaming accessories.

By 2009, StarCraft, along with its expansion Brood War, had sold more than 11 million copies, becoming the best-selling strategy game of all time on PC. StarCraft: Remastered was released in August 2017, which added enhanced graphics but kept the gameplay mostly intact, introducing a new generation of players to the game, re-energizing the game’s multiplayer player base. Blizzard made the original game and Brood War expansion available for free, allowing anyone to download and play the game.

opens in a new windowAmerican Journal of Play Interview with T.L. Taylor on esportsopens PDF file

opens in a new windowSearch The Strong’s Collection