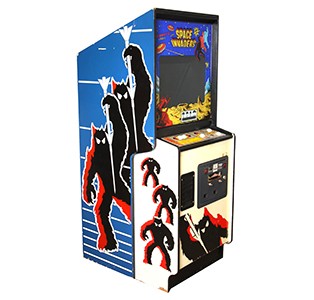 Designed by Tomohiro Nishikado and released in Japan in 1978, Taito’s arcade video game challenged players to zap an ongoing onslaught of aliens. Players took control of a powerful laser cannon that they moved across the bottom of the screen and used to fire at five rows of advancing aliens and occasional flying saucers worth extra points. The game included a “high score” at the top of the screen, and this popular feature soon became a standard element of arcade games.

The game’s components were revolutionary as well, for it was the first Japanese game to use a microprocessor. Although a handful of shooter games preceded Space Invaders, its runaway success, innovative features, compelling graphics, and elemental themes captured the public imagination, spurring many imitators and a craze for arcade games, first in Japan and then around the world. Its success prompted other Japanese companies to join the video game market. 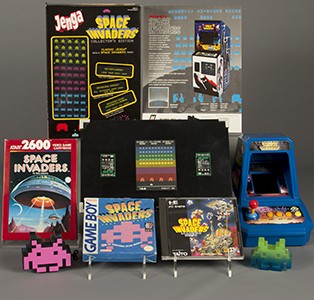 In 1980, Space Invaders energized the home console market when it became the Atari 2600’s most popular game. Millions of consumers purchased the console just to blast aliens in the comfort of their homes. Decades after its release, Space Invaders remains Taito’s most popular title, and the game’s pixilated, octopus-like alien invaders are some of the most widely recognized images in video games.

As inspiration for Space Invaders, designer Tomohiro Nishikado cites War of the Worlds, the 1897 sci-fi epic by H.G. Wells, which narrates a devastating invasion of Earth by an alien force.

Fly You to the Moon?