Pac-Man (or Puck Man as it was known in Japan) made video games a mass cultural phenomenon. 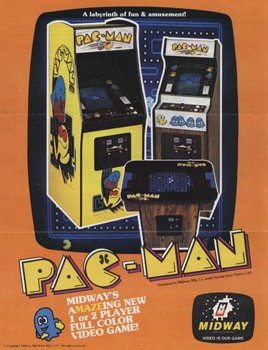 Created by programmer Toru Iwatani in 1980 and released by Namco in Japan and Midway in the United States, Pac-Man’s yellow, pizza-shaped title character and four colorful ghosts injected personality into video gaming. The maze game captured the imagination of millions of people and became the best-selling arcade video game ever.

At the same time Pac-Man himself  became the first iconic ambassador of the video game era—at once symbolizing video gaming and transcending it as he crossed over into mass culture. The game launched the first massive video game licensing craze, spurring the sale of home consoles, handheld devices, toys, clothing, and even housewares. ABC aired an animated television show, and the song “Pac-Man Fever” surged to the top 10 of Billboard’s Hot 100 chart in March 1982. “Pac-Mania” set the stage for later video game icons such as Mario and Sonic. 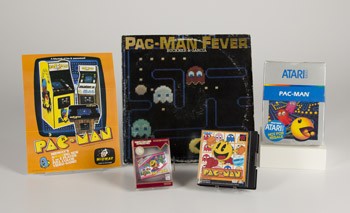 Since its release, Pac-Man and its many variations and sequels have munched their way into countless arcades, homes, and new digital spaces. In 2013, Namco and Disney launched Pac-Man and the Ghostly Adventures, a new animated television series, video game, and toy line that introduced Pac-Man to a new generation, and in 2015 a Super Bowl ad featured a Bud Light-drinking hero evading Pinky, Blinky, Inky, and Clyde.

Pac-Man’s charm combined with its compelling game play make it a game that each generation can enjoy anew.

According to designer Toru Iwatani, the name Pac-Man derives from the Japanese “paku-paku,” an onomatopoeic term for eating, and that he designed the character by rounding out the Japanese character for mouth, kuchi 口.

I Have Pac-Man Fever Again

The Lasting Appeal of Chase Games