The building game Minecraft has become a global phenomenon with endless game play options, enabling players to mine and use sets of pixilated blocks to build fabulous structures limited only by the players’ imaginations.

Originally released by Mojang in 2009, and now owned by Microsoft, Minecraft is a toy-game hybrid, relying just as much on traditional construction play from building blocks as it does on computer code. Players enter a random, procedurally generated world filled with resources they need to extract to start building. Most game objectives are self-generated and the tasks self-assigned, letting players concentrate on what they can create rather than on what score they achieve. 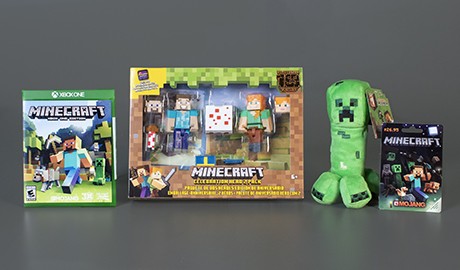 More than just a game, Minecraft is a community with tens of millions of active users, where gamers can play with friends on dedicated servers or with strangers from all around the world. They also chat, share videos, ask questions, and learn from one another. The game turns players into makers and blurs age boundaries as adults and children often occupy the same servers.

Minecraft’s success speaks to the maturing of video games as a cultural touchstone. No longer do game creators need to be obsessed about having the most realistic looking graphics. Instead the game features a retro simplicity that hearkens back to fondly remembered days of 8-bit computers.

Many historic landmarks and iconic buildings have been re-created in Minecraft, but in 2014, Simon Kokkendorf and Thorbjørn Nielsen of the Danish Geodata Agency made Denmark the first entire country to be explored in a 1:1 ratio within the game.

opens in a new windowMinecraft and the Building Blocks of Fun