Originally released in 1984 for IBM’s ill-fated PCjr, King’s Quest set the standard for the graphical adventure game genre and cemented Sierra On-Line’s cofounder Roberta Williams as one of the most significant computer game designers of the 1980s and 1990s.

Like previous text-based and graphical adventure games, players used a text parser that asked them to type precise commands and read textual descriptions. But now players also moved their character around the screen, positioning him at the precise spot where he needed to be. Although the plot and objectives seemed simple enough, the gameplay hinged on solving difficult puzzles that stumped many players who resorted to hint books or friendly advice to progress in the game. 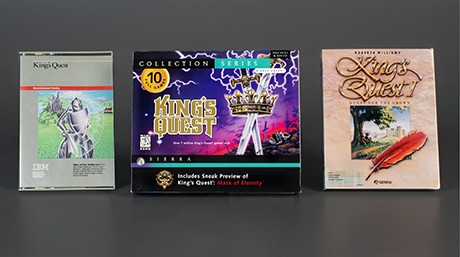 The game almost faded away to obscurity with the discontinued PCjr, but Sierra’s newly minted Adventure Game Interpreter (AGI), a scripting engine that made it easier to port previous software to different platforms, provided the game with a second life on more popular PCs such as the Apple II and Tandy 1000.

It is difficult to overstate King’s Quest’s influence on adventure games. It established or reinforced many of the conventions of the adventure games that followed it, including vivid animated graphics, a pseudo three-dimensional environment—which allowed players to move their characters in front of or behind objects on the screen—challenging puzzles, and tongue-in-cheek humor. It also paved the way for other iconic Sierra adventure series such as Space Quest, Leisure Suit Larry, and Police Quest.

While in the castle throne room, players glimpse the flag of Daventry—the country in which King’s Quest takes place—which is a vertical version of the flag of Sierra Leone. This is a pun on the game’s publishing company, Sierra On-Line.

opens in a new windowHunting for Easter Eggs

opens in a new windowA ROM of One’s Own: Snapshots from the Games-for-Girls Movement

opens in a new windowWomen in Games