Led by John Carmack and John Romero, the development team at id Software created a landmark game in 1993 that popularized the first-person shooter genre. Games like GoldenEye 007 (1997), Half-Life (1998), and Halo (2000) followed in the footsteps of DOOM. 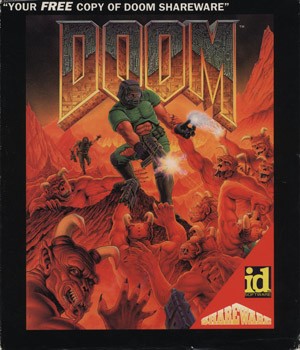 DOOM was more than just a commercial success—it also pioneered key aspects of game design and distribution that have become industry standards. The game’s designers created a game “engine” that separated the game’s basic functions from other aspects such as artwork. This allowed great flexibility in modifying the game, and other game designers began programming their games along the same lines. Id Software also tapped into emerging technologies to encourage multiplayer contests and digital distribution of DOOM.  By making the first of three episodes of the game available for free and then asking users to pay for further digital downloads of material, id demonstrated the potential of a business model that today dominates much of the video gaming world. 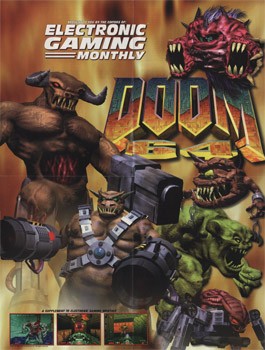 People had been playing violent games of pretend for millennia, but DOOM’s bloody battles with demonic monsters alarmed critics and politicians already on high alert about media violence. Although to this day research does not support claims that playing video games increases the propensity for real-life violence, DOOM became a highly visible symbol of the widespread debate over the role of games and violence in society, especially in the wake of the 1998 Columbine shootings, after which investigators discovered that the two gunmen, like tens of millions of other people, had played the game.

DOOM was a commercial success and spawned numerous sequels, but its most important legacy is the impact it has had on the form, function, feel, and perception of so many games that followed.

According to designer John Romero, DOOM’s protagonist remained unnamed so the player could more easily assume the character’s identity.

Graphic Violence as a Motivator for Game Players?