I Want YOU (to Test Your Grip): Uncle Sam as Arcade Icon

Stern Pinball’s recent announcement of a new line of KISS pinball machines “honoring one of the most influential and iconic rock bands of all time,” reminded me how frequently today’s coin-operated amusement games center on licensed brands, revered characters, and cultural icons.  Other recent examples include Stern’s The Avengers (2012) and Mustang (2014) and Raw Thrills’s Batman (2013). Yet arcade and pinball manufacturers have always produced games that capitalized on popular cultural trends and recognizable characters, even including Uncle Sam. 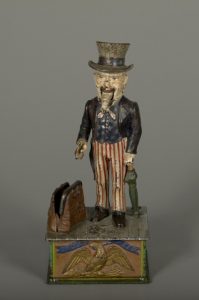 According to some histories, Uncle Sam, the thin and bearded allegorical figure that represents the United States and its government, traces his origins back to Troy, New York, native “Uncle Sam” Wilson. Uncle Sam, as the story goes, delivered meat packed in barrels to soldiers during the War of 1812. Wilson had labeled the barrels with “U.S.” for United States, but when locals, and later soldiers, saw these barrels, they assumed the lettering stood for Wilson’s sobriquet.  Eventually, Wilson and Uncle Sam merged into a symbol of the nation and its government. The Uncle Sam character appeared in popular imagery and literature shortly after the War of 1812 and was popularized in the political cartoons of artist Thomas Nast beginning in the 1870s. By that time, as historian Merle Curti explains in his book The Roots of American Loyalty, the Uncle Sam symbol conveyed a “cluster of qualities expressive of both the American people in their collective capacity and of their government: a hearty, fraternal impulsiveness, an instinctive, rustic wisdom, an ability to laugh at one’s own expense, tolerance, a readiness to listen patiently to all sorts of complaints, the will to see things through, the determination to look after soldiers and sailors, widows and orphans.” Such traits appealed to manufacturers of playthings, who, by the turn of the 20th century created Uncle Sam-themed puzzles, board games, mechanical banks, and coin-operated arcade machines.

During the early 20th century arcade machines such as grip, strength, and lung testers lined boardwalks and penny arcades. These testers encouraged arcade goers to socialize as they competed against each other or tried to impress their dates with feats of strength. With that in mind manufacturers often produced machines shaped like athletic men or animals (e.g. pull a tiger’s tail or an elephant’s trunk) to give them more personality. And as players searched for an appealing experience in the sea of these mechanical marvels, few could have passed up a chance to shake hands with a national icon. Created in early 1904 by Boston coin-operated machine builder Frank J. Howard, “’The Hand-Shake’ Automaton” allowed players to test their grip strength by shaking hands with an anthropomorphic arcade machine shaped like Uncle Sam. The harder a player squeezed Uncle Sam’s hand, the higher the score registered on the dial on his chest. For players, Uncle Sam represented a kind of national vigor and wisdom that Howard could capitalize on. As a 1904 advertisement for “The Hand-Shake” machine explained, “Uncle Sam, with a jovial smile on his face, stretches out his hand for a hearty ‘How-do-you-do?’” while registering “the exact strength of your grip, and act[ing] as a referee in strength-testing competitions.” Uncle Sam as an arcade machine exuded familiarity and trustworthiness as it invited players to settle their disputes with a squeeze of the hand. 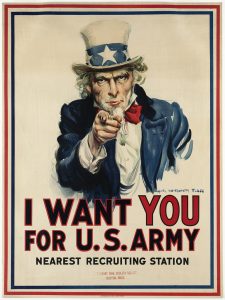 The machine proved so engaging and popular that in 1908 major amusement manufacturers such as Caille Bros. Co. and Mills Novelty Company produced enhanced and more ornate versions of “Uncle Sam.” By the time International Mutoscope Company and Exhibit Supply Company made their own renditions of the machine in the 1920s, illustrator James Montgomery Flagg’s depiction of Uncle Sam in a 1917 army recruitment poster was fresh in the imaginations of Americans. During World War I, the U.S. government printed 4 million copies of the poster that told Americans “I Want YOU for U.S. Army.” The poster, as historian Christopher Capozolla notes in his book Uncle Sam Wants You, “helped Americans understand their relationship to the wartime government,” but the poster also stands as the most enduring image of Uncle Sam. And it certainly couldn’t have hurt the sales and use of Uncle Sam arcade machines.

Today, collectors consider Uncle Sam grip or strength testers as among the most attractive, iconic, and sought after coin-operated machines. This summer, visitors to The Strong museum will have an opportunity to shake hands with a 1970s-era replica Uncle Sam machine at the museum’s Boardwalk Arcade exhibit. Although this Uncle Sam won’t test your physical strength, he will test the strength of your personality. Are you a “romantic,” an “expert at everything,” or a “cold fish”? Who else would you trust to be this honest?