In 1976, game designer Ron Halliburton of Arcade Engineering created a jumbo-sized pinball machine concept for the Bally Manufacturing Corporation. Bally created two prototypes for the electro-mechanical game they called Bigfoot and determined not to move it to production. Allan Reizman, Engineering Lab Supervisor at Bally, reported that the intense vibrations and stress the oversized components placed on the frame caused the game to shake itself apart. Yet, Halliburton’s former employee, Gene Lipkin, believed the game had potential. Bally sold the Bigfoot concept to Lipkin’s employer, Atari. The resulting game proved mythic in proportion. 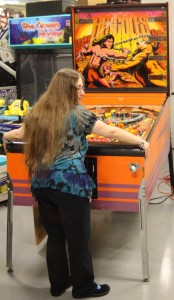 Atari’s Steve Bicker redesigned Big Foot and Jim Kelley created the artwork. In 1979, Atari released the solid state electronic game under the new title Hercules. The game earned the status of largest pinball machine ever commercially produced. The game’s physical stature represented the son of Zeus and the greatest of all Greek heroes—it stood seven feet tall, eight feet long, and three and a half feet wide. Hercules dwarfed its contemporaries. The 1979 game Old Coney Island, for example, had a playing field only four feet long and under two feet wide.

Due to its massive size, Hercules required many custom-made parts. Bicker explained, “The project manager, Steve Taylor, was an engineering genius… Steve had to engineer components that didn’t exist. He modified washing machine solenoids to power the flippers, the thumper bumpers, and the slingshots.” Taylor also used a pool cue ball instead of a standard pinball, which would have looked lost on the oversized playing field and would likely have slipped under the extra-large flippers. Atari designers also compensated for the excessive vibrations by adding extra shock-resistant components and reinforcing all electronic connections with stronger material. 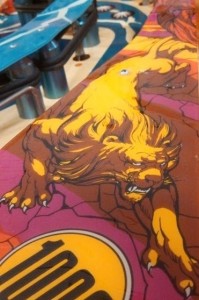 Intended for game play in amusement parks, Hercules needed extensive and colorful graphics to compete with the other games and activities that attracted players. Bicker recalled artist Jim Kelley being told to use “circus colors” in his designs, which he defined as “basically, as much orange and purple as you can stand.” Lovers of Greek mythology will find much significance in the artwork on the playing field, which incorporates some of Hercules’ most famous feats of strength. A serpent appears at the foot of the board, perhaps symbolizing the two giant snakes sent by Queen Hera to kill Hercules as a child. Hercules strangled the snakes before they could strike. A group of Amazon warriors stand at the top of the playing field, which may represent the ninth Labor of Hercules. This challenge required him to steal the girdle of Hippolyta, the Queen of the Amazons. A centaur appears on two of the bumpers, possibly depicting Nessus, who attempted to rape Hercules’ wife, Deianira. Hercules killed him with a poisoned-tipped arrow. Along the edge of the play field, discerning players will notice the Nemean Lion, a vicious beast with special fur that made the beast impervious to human weapons. Hercules choked the Nemean Lion to death.

Atari only manufactured seven commercial pinball machines, with Hercules being its last and arguably most novel. Pinball historians argue over the exact number of Hercules games produced, but they all agree that no more than 500 appeared on the market. We’re thrilled to have this unique game as part of ICHEG’s pinball collection. It’s a testament to the extensive creativity of the pinball industry. Hercules is currently available for play in our summer Boardwalk Arcade exhibit. 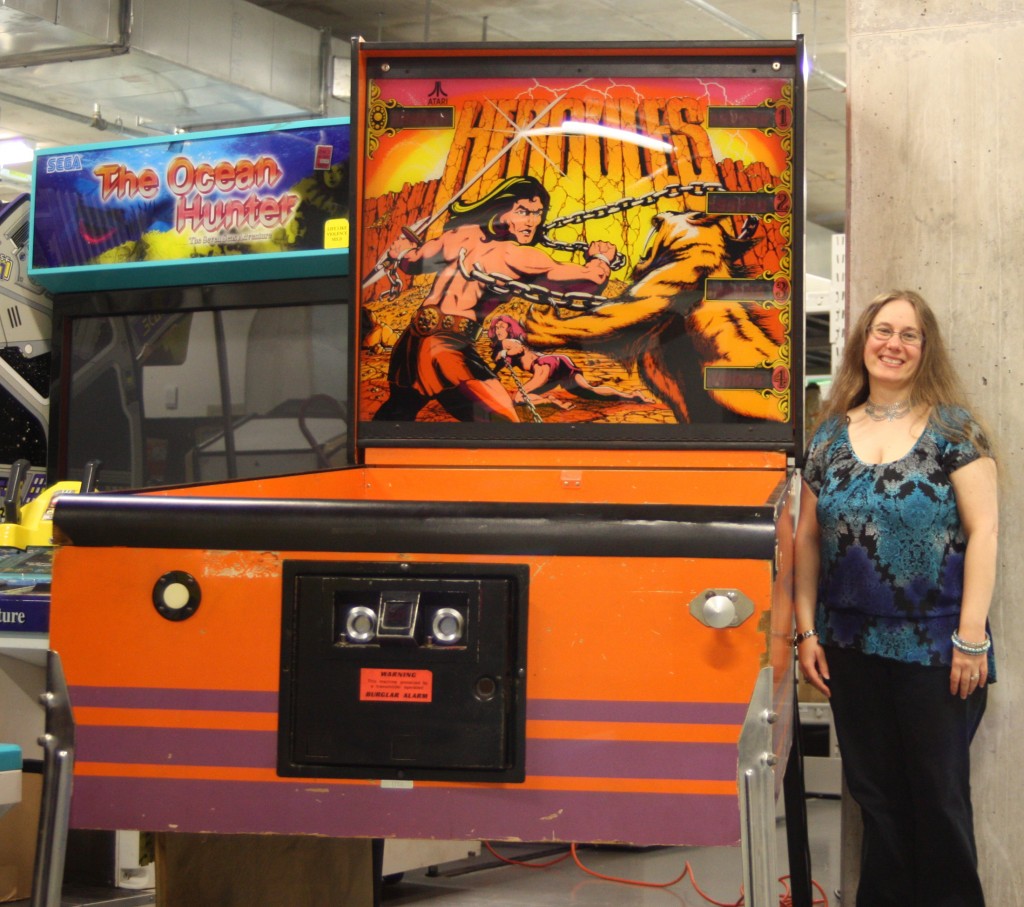