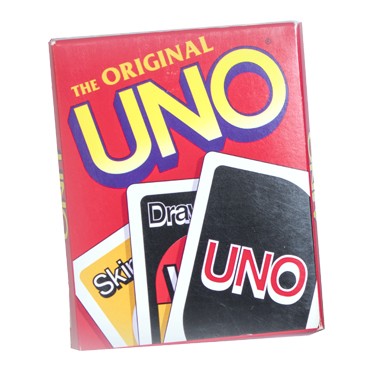 The Robbins family of Reading, Ohio, loved to play cards, especially the game crazy eights. But that game’s tricky rule variations sometimes led to friendly family arguments. Merle Robbins, a barber by trade and the father of the family, marked a deck with instructions, to avoid such confrontations. Play a king and the direction of play reversed, a queen meant skip the next turn, and aces were wild. The family and their friends soon learned that the newly marked decks made the game easier to learn, faster, and more easily understood by much younger players. Why not, they thought, design a new deck around our game and have it printed?

Robbins and his wife Marie had sold their home for their game investment and along with some money from their son Ray, they financed 5,000 copies of their new game. They named it “Uno” after the rule to announce when only one card is left in one’s hand, but also to subtly market the game’s name repeatedly—like the game bingo—during play. At first, Robbins sold the games out of his barber shop, but he and Marie soon developed a plan to travel the country and hawk their game. Some of the money from the sale of their house financed purchase of an old car and a camper trailer, with the signs, “Uno—Best Game in America,” posted on its sides. Circling down through Texas and then Florida, they played, and sold, Uno decks at every campground clubhouse along the route. Back in Ohio after selling all 5,000 copies, they confidently ordered another 10,000 decks. Merle and Ray placed these first in small retail outlets, but eventually larger stores outside Ohio stocked and carried Uno.

Robbins was a clever marketer, but an Uno fan named Bob Tezak, from Joliet, Illinois, made Robbins a purchase offer and soon marketed Uno all over the globe. Working at first out of their homes, and then from a storefront back room, Tezak and his small team, doing business as International Games Incorporated (IGI,) sold all of Robbins’ back stock of games. Tezak then re-designed the game and its instructions into the familiar red cards and package we all recognize. Uno saw unequalled sales throughout the 1980s. Several major game and toy manufacturers offered to purchase the rights, but Tezak held out until 1996, when Mattel, Inc. became owner of Uno. Best known for its toys, Mattel had never found real success with games, but with Uno Mattel got not only the game, but a game franchise. Uno was the perfect game to mark with a license from any blip in popular culture, from Disney to the NFL. And variations include everything from dexterity games such as Uno Stacko, based on the popularity of Jenga, to Street Fighter II Uno, a digital-only add-on for the Xbox 360. In 2017 Uno was officially branded the #1 selling card game in the world.

Uno is beloved for all the reasons its creator appreciated. It has been called nearly perfect in its broad family appeal. Kids can play against adults without feeling overmatched, and adults can play it together and still have a great time. What is America’s favorite card game? There’s a name for that! 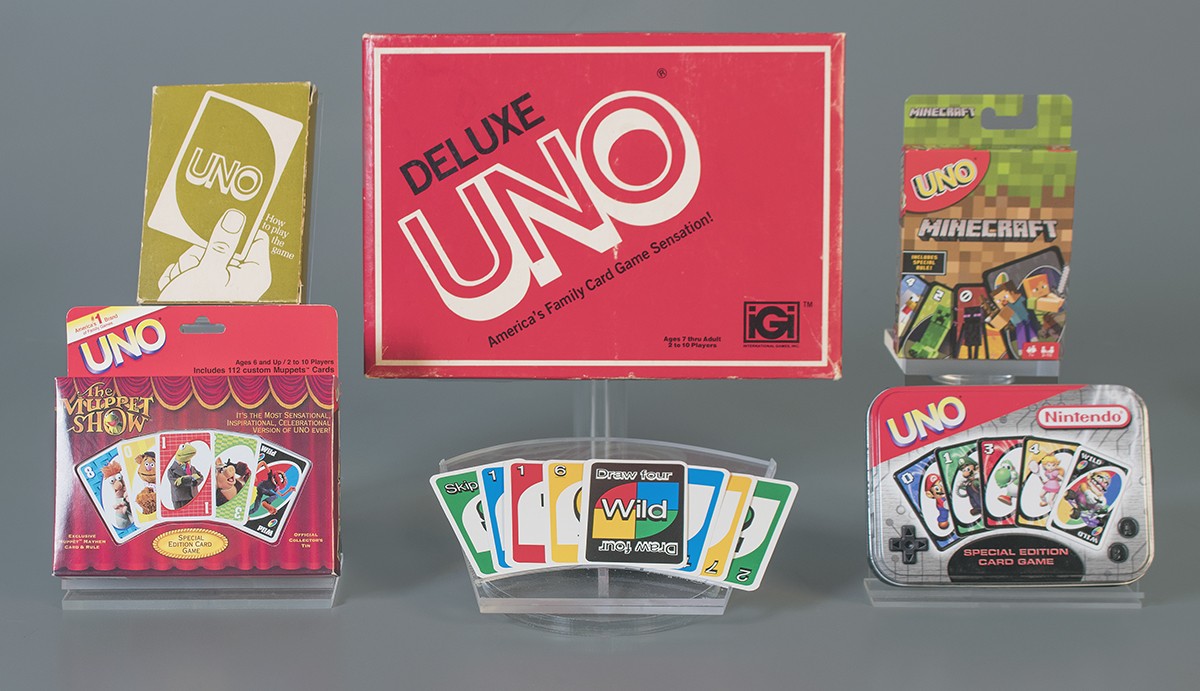 Factoyd: In 2018 Mattel introduced Uno’s new best friend—Dos. A similar race to lose cards, Dos literally doubles many of the points and penalties of Uno, including two central stacks of discard/draw cards. Yes, a player must shout “Dos” when she holds only two cards towards a win.