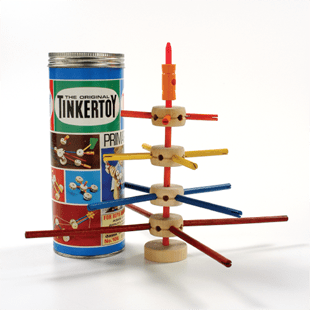 Stonemason Charles Pajeau and partner Robert Petit dreamed up the “Thousand Wonder Toy” in the early 1910s after watching children create endless abstract shapes with sticks, pencils, and old spools of thread. Adding holes on all sides of a round wooden wheel sized for sticks included in the set, they named their creation Tinkertoy. Shop owners successfully promoted the toy with elaborate store displays. Tinkertoy joined a host of other construction toys in the early 20th century, including Lincoln Logs and Erector Sets, helping kids to learn by exercising what we now think of as “spatial intelligence.” Originally intended for younger boys, after 1919 Tinkertoys attracted budding engineers through the addition of an electric motor. The toys even came with instruction for creating elaborate mechanical “tool,” such as printing presses, lathes, airplanes, and power saws. The postwar boom years of the 1950s finally brought color to the classic wooden toy. Playskool acquired Tinkertoy in 1985 and redesigned the toy in 1992 in honor of its 80th anniversary. No longer the wooden rods and spools of old, the new version featured brightly colored plastic parts, with each set designed to create particular objects.

Factoyd: In the mid-1970s, a group of MIT students created a tic-tac-toe-playing computer entirely from Tinkertoy dowels and spools