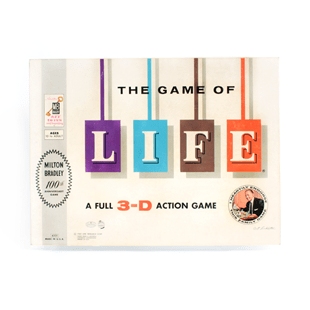 “You will learn about life when you play The Game of Life” went the original television advertising jingle for Milton Bradley’s Game of Life. Milton Bradley himself, the founder of the company, printed and sold a game called The Checkered Game of Life in 1860. As 1960 approached, the Milton Bradley Company enlisted independent inventor Reuben Klamer to come up with a game that would commemorate the firm’s 100th anniversary. Klamer took the “Life” name from the 1860 predecessor but created a completely new game for a new era. The Game of Life charted fresh territory for board games with its three-dimensional board and its integral plastic spinner. To promote the game, the Milton Bradley Company hired popular radio and television personality Art Linkletter to add his “personal endorsement.” Since then, the game has been updated several times and both electronic and specially-themed versions are now widely available. One of the best-selling games of all time, Life has also been translated into at least 20 languages.

Playing The Game of Life parallels a person’s life in several ways. Players must choose between “college” and “business” early in the game. Payday comes sooner for the businessperson, but college may mean higher paychecks in the end. Marriage and children usually occur during the game. Players in 1960 could end up in the Poor Farm or land happily in Millionaire Acres. The 2010 version offers everyone more comfortable destinations, sending players to either Countryside Acres or Millionaire Estates. In any event, chance and luck play the largest part in the journey. The game has been criticized over the years for being based solely on luck and for rewarding risk-taking, but Life has stood the test of time—and family game night would not be as much fun without it. 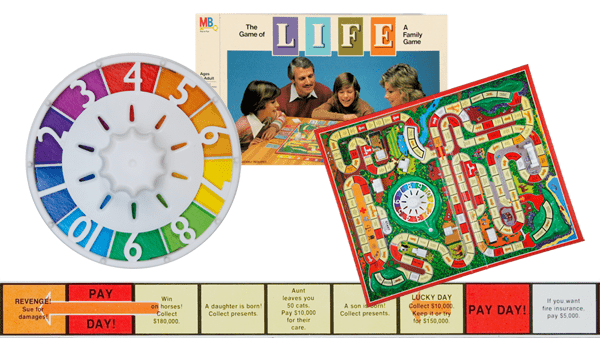 Factoyd: The Game of Life was updated in 1991 to reward players for “good” behavior, such as landing on spaces to recycle trash or help the homeless