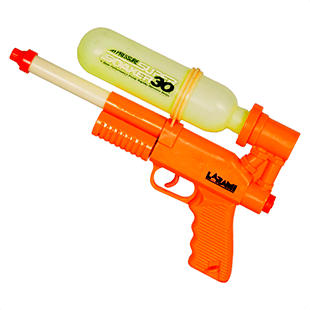 The Super Soaker story began in the early 1980s, when Dr. Lonnie Johnson, a Tuskegee Institute-trained mechanical and nuclear engineer, was working on NASA’s Galileo Mission to Jupiter. At night, Johnson was working on his own project—a new heat pump that replaced Freon with environmentally friendly pressurized water vapor.

Tinkering with the pump’s design at home, Johnson hooked the nozzle up to his bathroom faucet. The steady stream that shot across the room gave Johnson an idea for a high-powered water blaster. From PVC pipe and an empty soda bottle, he improvised a model he called the Power Drencher that featured an air pressure chamber and a water reservoir. Johnson later enlarged the tank and moved it to the top of the blaster, making the prototype look even more like a prop in a science fiction movie.

The first Super Soaker went on sale in 1990, when Johnson worked out a deal with Larami Corporation, a maker of inexpensive plastic toys and action figures, to produce his invention. Larami’s aggressive advertising sold 27 million Super Soakers at $10 each in the first three years of production. In the years following, innovations such as increasing water carrying capacity, altering water direction, and lengthening the distance of the water stream heightened the toy’s popularity. To date, Larami Corporation and then Hasbro have sold about 200 million Super Soakers in more than 175 variations, netting the companies about $1 billion in sales.

Fun with Super Soakers yields several dividends: exercise in the chases and brain-training while calculating vectors to moving targets and improvising tactics on the fly. Getting soaked in the process adds up to good, clean fun. 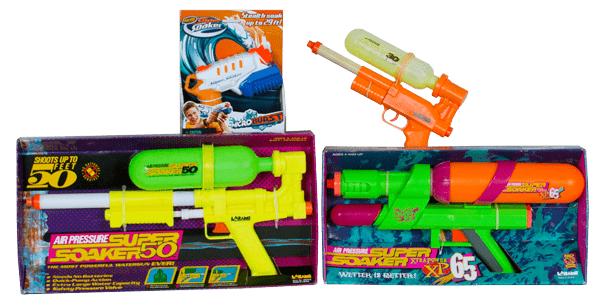