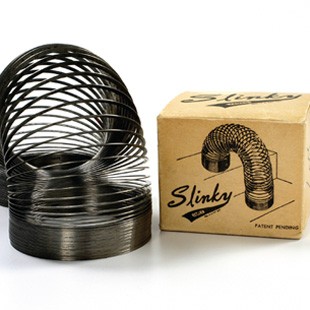 Mechanical engineer Richard James invented the Slinky by accident. In 1943, he was working to devise springs that could keep sensitive ship equipment steady at sea. After accidentally knocking some samples off a shelf, he watched in amazement as they gracefully “walked” down instead of falling. Along with his wife Betty, James developed a plan to turn his invention into the next big novelty toy. Betty combed the dictionary for an appropriate name and came up with “Slinky.” James designed a machine to coil 80-feet of wire into a two-inch spiral. The couple borrowed $500 to manufacture the first Slinkys. Initial sales proved sluggish but soared after Gimbels Department Store in Philadelphia allowed demonstrations for Christmas 1945. The first 400 Slinkys sold within minutes. An advertisement with a memorable jingle familiarized a national customer base. “What walks down stairs alone or in pairs and makes a slinkety sound? A spring a spring, a marvelous thing. Everyone knows it’s Slinky!” Slinkys glided effortlessly down stairs on television, but alas most household steps proved too tall and wide for long descents. Still, at the end of the 20th century and 250 million Slinkys later, people continued to buy them.