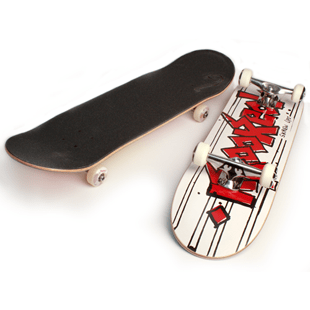 When it comes to the development of skateboarding, you could say that a calm sea is the mother of invention. Some historians report the first skateboarders were surfers who fitted wheels to boards and mimicked their surfing maneuvers. Skateboarding became something to do when the surf wasn’t up. But those first boards were clumsy, and the skater had very little control over his ride. The first wave of enthusiasts seemed not to notice. Millions of kids took to skateboarding by the late 1960s.

Over the years, interest in skateboarding has ebbed and flowed. Improvements in board technology and safety gear and the development of skate parks and plazas and other venues encouraged kids to attempt more sophisticated tricks. Champions who perfected the McTwist (a 540-degree turn on a ramp) and the 900 (a spin of 2.5 revolutions) inspired kids to push themselves to master a new maneuver. The skateboarding of today requires kids to develop strength, balance, creativity, and discipline and to make judgments about risks and rewards. Skateboarding is hard to master, but mastering it is so “rad.”

Factoyd: Skateboard legend Tony Hawk donated his personal board to the National Toy Hall of Fame when the skateboard was inducted in 2008