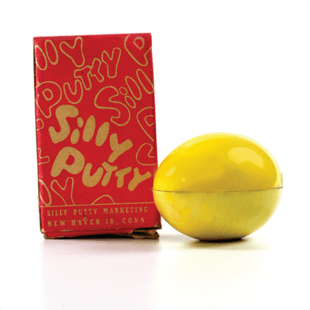 When the Japanese invasion of Asia threatened America’s rubber supply during World War II, chemists at General Electric began looking for a synthetic substitute. James Wright stumbled upon an odd concoction: a stretchy material that withstood decay and bounced 25 percent higher than rubber. When left untouched, this “solid liquid” flowed in slow motion and when struck sharply, it broke into pieces. Wright failed to find a wartime use for the goofy goo. Afterward, this “bouncing putty” or “nutty putty” amused guests at parties but did little else until toy marketer Peter Hodgson decided to list it as a novelty in his catalog. Hodgson hired Yale students to fill colorful plastic eggs with one-ounce blobs of “Silly Putty.” These he sold for a dollar, just in time for Easter. After a New Yorker article featured Silly Putty in 1950, orders topped 250,000 in three days. Millions have sold every year since. More colors appeared in 1990, including a glow-in-the-dark version in 1991. Useless originally, people have since bounced it, used it to lift images off the comic pages, and cleaned typewriter keys with it. Astronauts even took it aboard Apollo 8 to stick down tools in zero gravity! 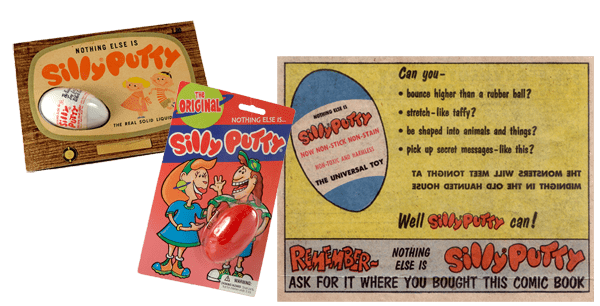