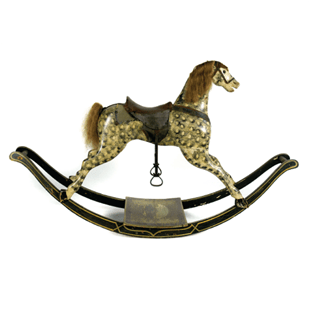 For 4,000 years, the domesticated horse has been a faithful servant to warriors, farmers, travelers, and freighters. Down through the centuries, the horse has inspired likenesses and toys of many forms for children’s play. As wealthy Europeans began using horses for leisure activities in the 16th century, wooden rocking horses began appearing in the nurseries of their children.

Rocking horses aren’t hard to make. They are only slightly more difficult to build than the stick horses—“hobby horses”—that older children hop along on during gleeful pantomime. The first wooden rocking horses looked like cradles, adapting a cradle’s form so that toddlers could begin to entertain themselves. Fathers and grandfathers with spare time and carpentry skills sawed and joined two upright, solid boards (the curved base of each formed the rocker) with a horizontal seat topped by a horse’s head.

By the 18th century, the solid rockers gave way to lighter products as elegantly carved legs attached to long, narrow bows. In the next century, mass production made sleek rocking horses available to a growing number of middle-class children. By Victorian times, the rocking horse we know today became a fixture of childhood. The new materials of the 20th century and safety concerns changed the appearance of the rocking horse. But nothing has changed children’s appreciation for the hypnotic motion, the illusion of speed, and the fantasy of conquering worlds one can feel only on top a noble steed.