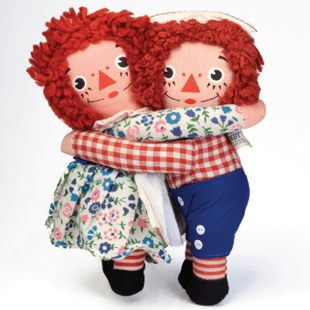 One day in 1915, as the story goes, Johnny Gruelle’s daughter Marcella brought him an old rag doll. He drew a face on the worn fabric and called the doll Raggedy Ann. Gruelle, a cartoonist and illustrator, wrote a children’s book about Raggedy Ann in 1918. Publisher P. F. Volland arranged to sell Raggedy Ann dolls along with the books, and the tie-in between Gruelle’s Raggedy Ann Stories and the dolls proved a marketing hit. In 1920, Gruelle introduced the Raggedy Andy Stories. In them, when humans weren’t looking, Raggedy Ann and Andy came to life and embarked on many adventures. Gruelle averaged one new book each year for twenty years. The books and dolls have remained popular for the past century. Raggedy Ann entered the National Toy Hall of Fame in 2002. Her brother Raggedy Andy joined her in 2007. The dolls are reunited in this place of honor—where they belong, together of course, for always.