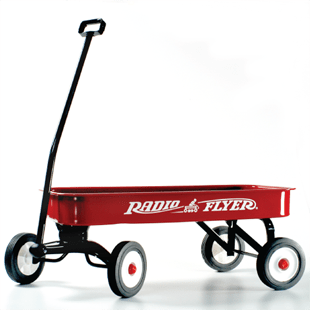 Sixteen-year-old Italian immigrant Antonio Pasin arrived in New York in 1914 carrying little else than the carpentry skills he had learned from his father and grandfather. His parents had sold the family mule to pay for passage. Working in Chicago as a manual laborer, Pasin bought used woodworking equipment and set up shop in a rented room. Building little red wagons at night and peddling them during the day, he saved enough money to found the Liberty Coaster Company in 1923, naming it after the statue he had admired in New York Harbor. In 1930, he began mass-producing the toys out of stamped metal. He called his new wagon the “Radio Flyer,” another patriotic reference to his homeland, this one after a famous Italian invention, the radio. Intended “for every girl and boy,” the wagons sold for less than $3 each. Even in the depths of the Great Depression, they sold at the rate of 1,500 a day. Radio Flyer designers added high sides for carting kids in 1950s, borrowed bright colors and slick tires from muscle cars in the 1970s, and even created an all-terrain version, the Quad Shock Wagon—to match the SUVs in the 1990s. 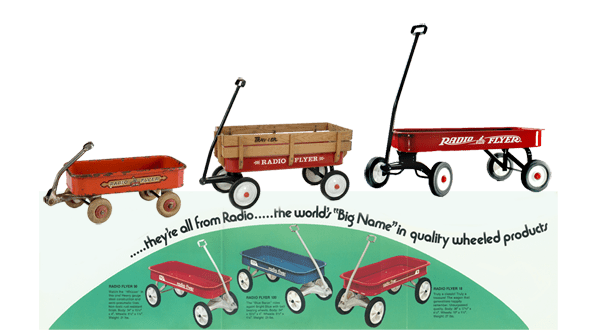 Factoyd: Introduced in 1923, the first Radio Flyer Wagon—No. 4 Liberty Coaster—was made of wood and steel