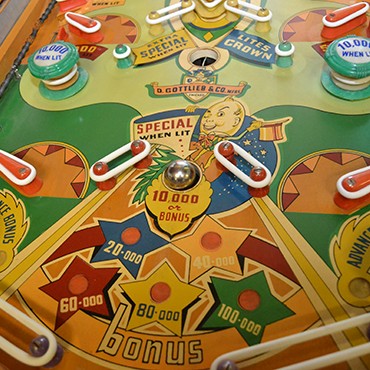 Pinball traces its roots to bagatelle, an 18th-century French parlor table game that challenged players to use a stick to shoot balls across a table filled with pins and scoring holes. But modern coin-operated pinball machines originated in 1931 as American manufacturers separated players from the bagatelle board (or “playfield”) with a piece of glass, incorporated mechanical systems to remove balls from the playfield, and added a coin mechanism to monetize game play. Later that year, David Gottlieb’s Baffle Ball helped ignite the pinball craze of the 1930s as the games entertained millions of people during the Great Depression.

During the 1930s and 1940s pinball designers and manufacturers introduced new features such as electrified scoring bumpers, chimes, and bells to add excitement. Playfields and “backglasses” positioned at the back of the playfield provided pinball manufacturers and artists with blank canvases for vibrant visuals often centering on popular trends, industry, fairy tales, and young women meant to appeal to mostly male players. The addition of electromechanical flippers on Gottlieb’s 1947 game Humpty Dumpty gave players the ability to control, aim, and fire a pinball across the game’s playfield. Flippers transformed pinball from a mostly static game of chance derided by social reformers who made it illegal in some parts of the United States to a dynamic game of skill that encouraged players to transfer the skills they acquired playing one game to another game.

By the end of the 20th century, electronic pinball machines offered players not only the opportunity to sharpen their eye-hand coordination by shooting a steel ball through a miniature playground of ramps, pop bumpers, and interactive toys, but also the challenge of following,  analyzing, and mastering complex rules. 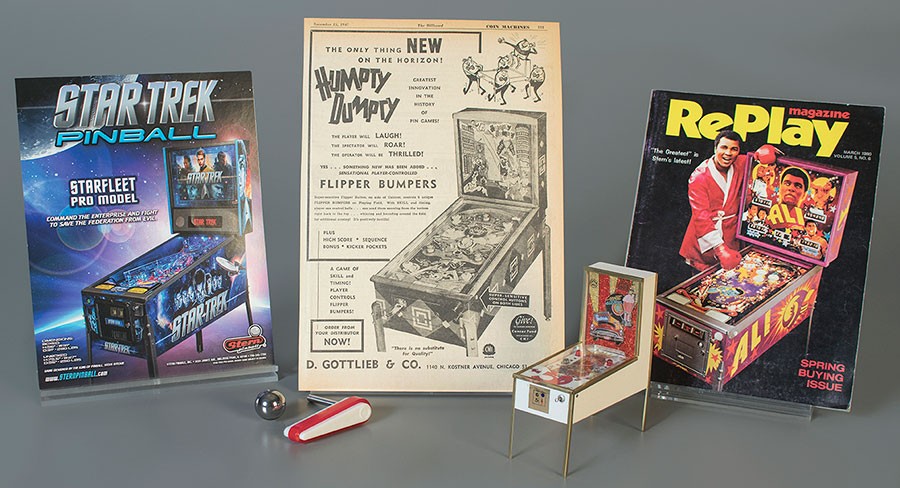 Factoyd: In 1931, carpenter Arthur Paulin and salesman Earl Froom crated Whiffle, a coin-operated, glass-covered game that recirculated its balls after play. When shooting marbles into scoring holes proved popular with the public, dozens of companies, including pinball popularizers Gottlieb and Bally, produced games of their own.