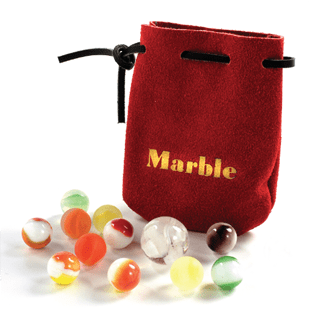 Ancient Egyptians, Greeks, and Romans all played with marbles made of stone or polished nuts. Shakespeare mentioned marbles in his play Twelfth Night. The earliest settlers brought them to America from Europe, and even a few founding fathers shot a skilled game! A kids’ game, marbles has also become an officially recognized sport with its own world championship competition governed by the Official Set of State and Interstate Rules. Stone or clay formed the earliest marbles, but the alabaster “alley taws” made better shooters than the cheaper, clay “commoneys.” In the mid-19th century, a German glassblower invented a pair of special scissors to cut the molten glass, making glass marbles affordable for the first time. Glass marbles quickly dominated the market, particularly after industrial machines made them more efficiently, lowering the price. Valued as much for their beauty as the games played with them, marbles inspired one 19th-century enthusiast to describe the “twisted spiral of colored filament” in glass marbles as “thin music translated into colored glass.” Parents frowned when kids “lost their marbles” in games of chance, and today both children and adults consider marbles collectibles as well as time-honored toys.