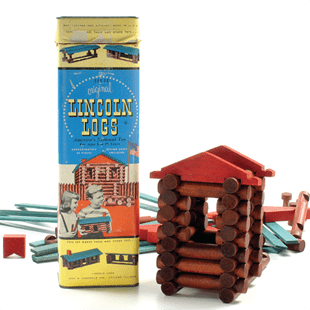 The idea for Lincoln Logs struck John Lloyd Wright as he watched workers build one of his father’s designs—an earthquake-proof building in Japan. The construction toy he created came with logs notched at both ends so kids could build structures sturdy enough to stand up to rough play. Good timing and a good “hook” made for success. Lincoln Logs appeared in 1924, just as parents were discovering the value of construction toys. Wright used the storied past of the American frontier to sell his creation, naming the toy after President Abraham Lincoln’s fabled childhood cabin. Kids could be as resourceful and self-reliant as their pioneer forerunners who rose from humble origins to become, well, President, in at least one case. Bucking advertisers’ requests to picture the toy on the box, Wright’s packaging featured a simple drawing of a log cabin, a small portrait of President Lincoln, and the slogan, “Interesting playthings typifying the spirit of America.” Television shows like Pioneer Playhouse and Davy Crockett featured Lincoln Logs advertisements, boosting sales enormously in the early 1950s. Lincoln Logs are still sold today, more than three-quarters of a century after they first appeared.

Factoyd: The intial idea for Lincoln Logs came from earthquake-proof structures in Japan, not the American log cabin