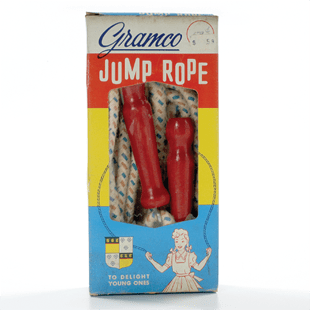 “Cinderella, dressed in yellow, went up stairs to kiss a fellow….” For generations, American girls have spent their childhoods jumping rope. But it really began as a boy’s activity in the 17th century among Dutch settlers. Girls grabbed the rope handles in the 1800s even though most advice books cautioned against too much exertion. As leisure time increased over the course of the 19th century, girls took to jumping rope in increasing numbers. By the early 1900s, girls’ games focused on social activities, while boys’ games centered on competition. Jumping rope highlighted this change. Not only did girls tend to jump rope in groups, but they also accompanied their jump rope games with rhythmic songs. Some, such as “Teddy bear, teddy bear, turn around,” emphasized acrobatic skills, requiring the girls to perform the various feats mentioned in the tune. Others, like “Cinderella,” spoke directly of relationships, especially the prospects and perils of matrimony.

Factoyd: Seventeenth-century Dutch settlers brought the game of jumping ropes to America, and at the time it was considered an exclusively boy’s game