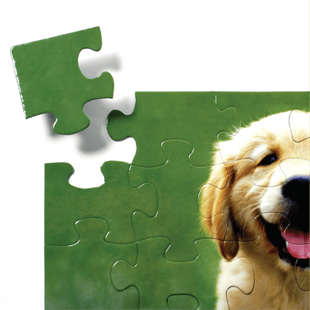 Around 1760, English mapmaker John Spilsbury pasted one of his maps to a board, cut around the borders, and created the first jigsaw puzzle. The idea caught on, and various British manufacturers created educational puzzles to teach geography, history, and Holy Scripture. Puzzles crossed the Atlantic slowly, however. The first American puzzles appeared around 1850, and, like their predecessors, they featured maps cut from wood. Following the Civil War (1861–1865), well-known game producers such as Milton Bradley and Parker Brothers offered puzzles that combined educational value with entertainment. In 1908, Parker Brothers introduced its Pastime Puzzles, featuring pieces cut as animals, letters, and geometric shapes. Other manufacturers introduced interlocking pieces about the same time. These easier puzzles created a small craze, but the real heyday of puzzles emerged in the 1930s. Manufacturers mass-produced die-cut cardboard puzzles and sold them cheaply enough for most Americans to afford, even in the midst of the Great Depression. Newsstands offered weekly jigsaw puzzles and magazines devoted to the pastime. The puzzle craze faded in the 1950s, as television increasingly dominated home entertainment. But even today, families still enjoy the challenge of a good puzzle.

Factoyd: In the 1920s, a worker who could cut 1,400 puzzle pieces per day for a week would earn $16. Speedier workers could earn a bonus