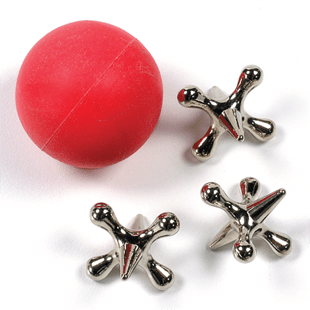 Whether called Iguni, Abhadho, Cincos Marias, or Huripapa, jacks is one of the oldest and most widespread games in the world. All jacks games share a strategy: toss a ball in the air and scoop up pieces before the ball bounces. In this game of skill, almost any collection of small objects will work—beans, rocks, stones, and even bones. Throughout history, kids in virtually every culture on the globe have sat cross-legged and played some version of the game. Cro-Magnon parents may have encouraged their children to play jacks on cave floors, to increase the eye-hand coordination vital to later success at hunting. Kids in ancient Egypt played “knucklebones” with sheep toe bones. The game of knucklebones led to dice games for boys, and jacks, usually played with a wooden ball, for girls. In modern times, kids followed a bouncing rubber ball. The game inspired popular children’s songs such as “This Old Man” (he played one, he played two, and so on). Classic American versions of jacks include Eggs in the Basket, Pigs in the Pen, Jacks on the Rooftop, Five Finger, and Challenge.

Factoyd: Archeologists have found evidence of jacks in ancient Egyptian murals, making it one of the oldest known toys