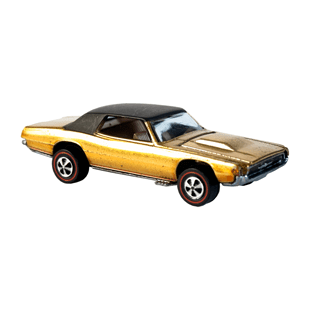 In the 1960s, Elliot Handler, a cofounder of Mattel, Inc., envisioned a die-cast car to surpass the popular English Matchbox brand. He wanted a line of toy cars to dominate Mattel’s boys’ division just as its Barbie doll had become the strongest brand in its girls’ division. Handler insisted that the toy cars look authentic, so the project enlisted Harry Bradley, a top auto designer from Chevrolet, to lead the toy design team. What Handler really wanted was not the cars of Detroit, but the radical versions altered by custom-car shops—like vehicles he often saw on California’s highways. And Handler wanted his little cars to zoom. So, Mattel engineers produced “muscle” cars with thick, plastic mag wheels built for speed and minimal friction axles that featured “torsion-bar suspension,” which gave the cars shock absorbency and wheel bounce. Kids coveted the 16 muscle models—custom Barracudas, Camaros, Corvettes, Cougars, Firebirds, and others—that Mattel first offered in 1968. Mattel’s designers enhanced the cars’ appeal with the candy colors of Spectraflame, a painting process that revealed the shiny metal beneath the colors. The toy company developed flexible, plastic tracks for racing Hot Wheels, complete with the famous loop that became the symbol of the brand to several generations of kids.

Hot Wheels’ success increased with each year’s new models. Combining popular models with speed made the miniature cars even more appealing than Mattel or Handler could have imagined. Sales topped 16 million in the first year and have hardly slowed since. Mattel has produced upwards of three billion cars, outdistancing the combined output of the Big Three automakers. More than 800 models and 11,000 variations of Hot Wheels have been manufactured, and these days—according to Mattel—eight cars are sold every second.

Factoyd: If all of the Hot Wheels cars sold since 1968 were placed in a line, it would circle the earth four times