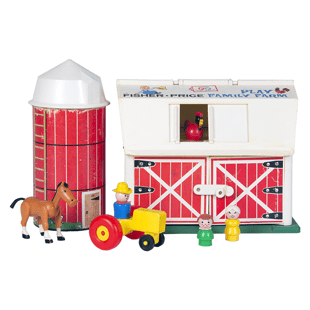 Fisher-Price first offered its Little People in a 1959 Safety School Bus pull toy. Made of wood and lithographed paper, the figures helped small children imagine big adventures. These stylized figures populated a variety of play sets that encouraged youngsters to explore the world beyond their homes and to imagine themselves at school or the airport, at the service station or the amusement park, and at the zoo or a faraway (and wonderfully noisy) farm. Fisher-Price has offered a number of play sets with their little figures over the years, but children of successive generations remember the Little People in the sets best. The figures often became separated from their miniature buildings and vehicles, but the separation did not lessen their appeal. Tucked in a small pocket for safekeeping or secured in a special place in the playroom, the figures took on a life and purpose far removed from the make-believe that Fisher-Price initially intended.

Fisher-Price made the first Little People of wood and lithographed paper; solid, single-colored wooden bodies followed. Later figures were made of hard plastic. In the 1980s, concerns about the small figures becoming a choking hazard led to the 1991 introduction of a new design for larger diameter Little People known as “Chunky People” or “Chunkies.” By the mid-1990s, the Little People became more people-like with arms, legs, and dimensional faces. In 1975, under licensing agreements with Sesame Street, Fisher-Price presented familiar television characters in themed play sets. When Fisher-Price merged with Mattel in 1993, it opened up international markets, and the Little People became favorites of young kids throughout the world.

Factoyd: Since the first small wooden figures appeared in the 1959 Fisher-Price Safety School Bus, more than two billion Little People have been sold in 60 countries.