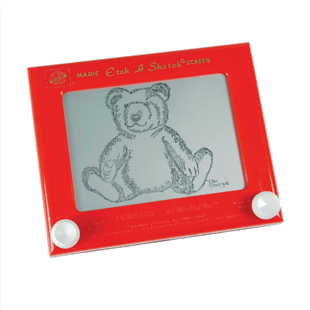 French electrical technician André Cassagnes applied his experience with the clinging properties of an electrostatic charge to invent a mechanical drawing toy with no spare parts. He called his creation L’Ecran Magique, the magic screen. Introduced at the International Toy Fair in Nuremberg, Germany, in 1959, the gadget failed to draw much attention. Numerous manufacturers passed over a chance to pick up the new toy, concluding that Cassagnes wanted too much money for it. However, the Ohio Art Company took a second look and invested $25,000, more than they had ever paid for a license. Ohio Art renamed the toy “Etch A Sketch” and began mass production later that year. Saturation advertising on television turned the toy into a must-have item for Christmas, 1960, and Ohio Art’s factory worked feverishly until noon that Christmas Eve. Etch A Sketch has changed little since then. Static charges hold a mixture of aluminum powder and tiny plastic beads to the inside of a clear plastic screen. Knobs control the horizontal and vertical rods that move a stylus where the two meet. The point scores a line across the screen’s reverse side. Experts can draw a curved or diagonal line. Turning the screen over and giving it a shake erases the picture.

Factoyd: The Etch A Sketch Club was formed in 1978 and today includes more than 2,000 Etch a Sketch artists and enthusiasts