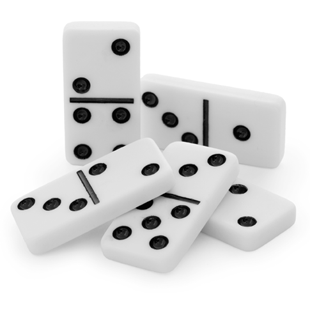 Dominoes, cousins of playing cards, originated in China in the 1300s and represent one of the oldest tools for game play. From professional domino game competition to setting them up and then knocking them over, dominoes allow for a variety of games, as well as tests of skill and patience. The markings on dominoes, known as pips, originally represented the results of throwing two six-sided dice. The European dominoes we recognize today differed from the Chinese versions by incorporating seven extra dominoes—six representing the results from throwing a single die with the other half of the tile left blank, and one representing the blank-blank (0-0) combination.

Most domino games involve emptying one’s hand while blocking opponents’ play. Scoring games, such as bergen and muggins, determine points by counting the pips (spots on a tile) in the losing players’ hands. Other play formats include blocking games such as matador, chicken foot, and Mexican train. Some domino games duplicate card games—without the possibility of the wind blowing the cards away. And every sort of domino game helps teach kids number recognition and math skills.

Who first set up a row of domino tiles and then gave one a push? We don’t know, but the practice, known as “toppling,” probably dates from the tiles’ early years. The Netherlands hosted an annual domino toppling exhibition called Domino Day from 1986 to 2009, culminating in an event where a team toppled 4.5 million dominoes. Do-it-yourself topplers are nearly as skilled, too, as is proven by the many amazing amateur toppling videos on the Internet. 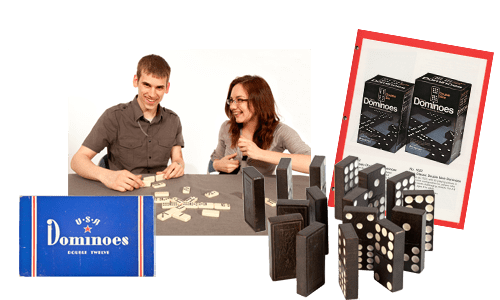 Factoyd: Plastic domino sets reproduce the look of early dominoes made of ivory and ebony. They take their name from the French word domino, meaning a priest’s white and black winter hood >