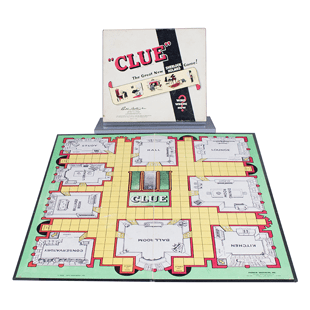 Who doesn’t appreciate a good mystery? Between the world wars, pianist Anthony Pratt enjoyed the murder mystery party games he saw played at posh European hotels where he worked. In 1943 Pratt and his wife Elva designed a board game based on those party games, centered on deduction. Winning players solve a murder mystery by eliminating possible locations, weapons, and murderers to come to the correct conclusion. Pratt was granted a patent in 1947, but post-war shortages halted his game’s manufacture for several years. London’s Waddington’s Games finally published it as Cluedo in 1949, and Waddington’s American partner Parker Brothers brought out a slightly modified version called Clue the same year. There were other murder-solving games prior to Clue, but none combined its simplicity of play with the enjoyment of solving the “whodunit,” not to mention the “where” and the “what,” of the game’s pretend murder.

Americans in the 1950s loved mysteries, whether encountered in Agatha Christie novels or Alfred Hitchcock films. And designers gave Clue an appropriately puzzling mansion, Boddy Manor, with many rooms in which to commit murder. The aptly-named victim, Mr. Boddy, is surrounded by the familiar, suspicious manor guests. Was it Miss Scarlet with the rope? Is Mrs. Peacock hiding the lead pipe? Does Colonel Mustard carry a revolver? And what is it with Professor Plum? With a fixed number of potential murderers, weapons, and locations, Clue offers 324 different murder scenario combinations—so the game plays differently nearly every time. Clue’s enjoyable, repeatable play ensured its success during the years since its introduction. It remains one of the 10 best-selling games.

Over time, Clue has partnered with famous fictional detectives from Sherlock Holmes to Sam Spade. While game designers often change Clue’s play methodology and design, fans demand classic versions, so those are still widely produced. Licensed game themes today range from Alfred Hitchcock Clue (Miss Scarlet as Melanie Daniels from The Birds, who can kill with a seagull in the diner or the Bates Motel,) to Scooby-Doo (Velma is Mrs. Peacock, the weapons are monsters,) to The Big Bang Theory (which friend betrayed Sheldon, and how?) And Clue appears as plays and a musical and in film, television, books, and comics, to name only a few examples. It’s probably no mystery why Clue has earned a place in the National Toy Hall of Fame. 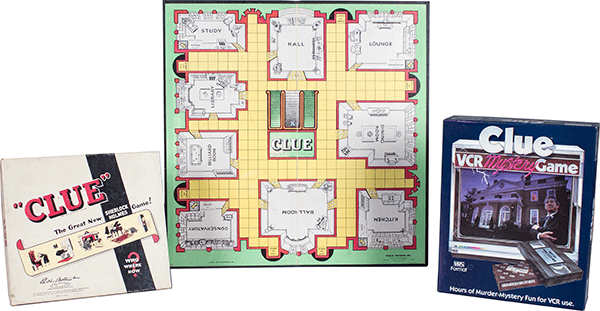 Factoyd: Hasbro produced or licensed at least three different versions of The Simpsons Clue to date. The first in 2000, featured Mr. Smithers as Mrs. White and Krusty the clown as Colonel Mustard. The third (2003) edition switched characters, with Marge playing Mrs. White and Bart playing Colonel Mustard. The Simpsons Clue was the first in which other characters played the classic Clue suspects.